7 things I learned from Mother Teresa - An Authorized Biography 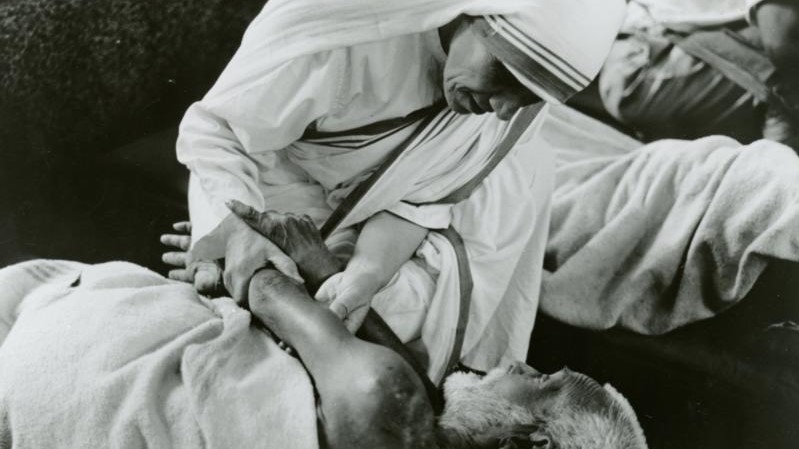 Mother Teresa cares for a sick man in this undated photo (CNS photo/KNA)
I was at a friend's house, and we landed on the topic of good, faith-inspiring books. We recounted our all-time favourites before I admitted that I really wanted to read another one but didn’t know where to start. As soon as those words left my mouth, she jumped up and ran into her room enthusiastically. She returned, holding Mother Teresa - An Authorized Biography. “I think you’ll really like it,” she told me. Then, without an ounce of hesitation, she insisted I take it home. I thanked her wholeheartedly, at that moment mostly out of shock that she would lend out her personal book — but looking back, I should have thanked her for the depths she had just placed in my hands. Mother Teresa - An Authorized Biography has been one of the most beautiful reads of my life. It recounts her story from childhood to the streets of Calcutta and beyond. The book serves as both a biography and an intimate look at faith – her faith – in action. With that, I hope to share some of the priceless insights I discovered within this book. This list touches upon seven, but in reality, the biography is filled with endless wisdom.

These were the precious words that Mother Teresa’s own mother used to instruct her in her faith as a girl, back when she was known as Agnes Bojaxhiu. Her mother played a central role in her formation and in laying the groundwork for who she would later become. “Be only all for God” would remain a distinctive saying of Mother Teresa throughout her life. Her mother’s instruction was so impactful, in fact, that an older Mother Teresa proclaimed, “One day [my mother] will ask me: My child, have you lived only, all for God?”

2. “Joy is the compass that points the direction in life.”

Surprisingly, Mother Teresa was not always certain of her vocation. As a teenager she went through a discernment process not entirely dissimilar from that which youth experience today. She felt the call to religious life at age 12, but it took her six more years of thought and prayer to fully decipher, and accept, her vocation. One day she asked Father Jambrekovic, an influential mentor figure, how she could know if God was really calling her to religious life. He responded, “Joy is the proof of the righteousness of any endeavor — joy is the compass that points the direction in life.”

3. The greatest suffering of all

Though Mother Teresa encountered many people suffering from extreme physical poverty — those without food, clothing, shelter, etc. — she always insisted that the greatest poverty of all was the loneliness of not feeling loved. Mother Teresa would recount a particular experience of when she rescued a dying woman on the streets of Calcutta: She found the woman weeping, not because she was on the brink of death, but because her family had deserted her. This view on poverty motivated her approach with all those she helped. Even if it was for a brief moment before death, she strove to share all the love and companionship she could possibly give.   4. Sacred silence  Once Mother Teresa received her “call within a call”, rather than announce it from the mountaintops, she retreated into a period of, as the book puts it, “silence, solitude, and prayer”. Those around her recalled her entering into a period of deeper prayer than usual at this time, without knowing the reason behind it. Apart from her spiritual director, Father Van Exem, she told no one else of her inspiration until it was time, not even her fellow nuns at the Loreto convent. This sacred silence in the wake of God’s calling seemed to be not just wise but essential for Mother Teresa — and in hindsight allowed God to do his best work.

This was the simple phrase tacked onto the blackboard of the Loreto convent in Calcutta once it was known that Mother Teresa was leaving to establish her own order — much to the shock of her fellow nuns. While many might naturally have questioned whether her new path was the will of God or not, these words encouraged them to pray instead of gossip or speculate for themselves. This phrase struck me as helpful when undergoing our own life U-turns, or witnessing those of others, whether we understand them initially or not.

Mother Teresa held to the belief that “the capacity to radiate God’s love was dependent first on a personal interior contact with the fire of God’s love.” As a result, she encouraged all who partook in her mission — from fellow Missionaries of Charity to lay volunteers — to pray and to be in union with Jesus first and foremost. In this way the work would be possible. The book explains, “Without this essential spiritual perspective, without the purity of heart vital to the seeing of God...Mother Teresa was firmly convinced that her sisters would be unable to bring peace to the dying, touch the open wounds of the leper, and nurture the tiny spark of life in babies whom others had abandoned.”

7. “She always labored with tireless zeal and also evident joy.”

Though their work with the poor was endless and exhausting, Mother Teresa encouraged her sisters to take on a spirit of “cheerfulness” or “cheerful sacrifice” amid everything they did. And she herself was the first to practice what she preached. According to the book, she was often the last to go to bed and the first to get up in the morning. Yet, at the same time, she was the first to smile. An original sister of the Missionaries of Charity said of her, “In Mother we really saw the living constitutions — the Joy of being poor, of working hard.”   These seven points do not do justice to the biography or to Mother Teresa. I highly recommend anyone read the full book for themselves! Like my friend said to me that one day, “I think you’ll really like it.”