You are the salt of the earth. But if salt loses its taste, with what can it be seasoned? It is no longer good for anything but to be thrown out and trampled underfoot.
You are the light of the world. A city set on a mountain cannot be hidden. Nor do they light a lamp and then put it under a bushel basket; it is set on a lampstand, where it gives light to all in the house. (Matthew 5:13-15) 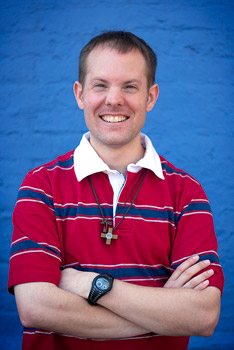 When I began my summer internship at Salt + Light Television in April, I prayed that my time here would be a constructive learning experience applicable to my future ministry as a Basilian religious, seminarian, and eventual priest, and that I would be able to contribute in such a crucial area of ministry as Catholic media. I knew not at the time in what ways my understanding of media would grow, or what my role would be among so many gifted and kind people with whom I have worked this summer. Salt + Light Television draws its name from the above-quoted passage from the Gospel of Matthew. That passage has long inspired me, because it begins not as a request by Jesus of His disciples to be “salt of the earth” and “light of the world,” but with a statement of fact: “You are the salt of the earth” and “the light of the world.” Matthew 5:13-15 was also the theme of the seventeenth World Youth Day in 2002. In his final homily of World Youth Day on July 28, 2002 at Downsview Park in Toronto, Pope John Paul II followed his reflection on the words of this Gospel with this emphatic declaration: “You are our hope, the young are our hope.” The late Pope then exhorted the pilgrims: “Do not let that hope die! Stake your lives on it! We are not the sum of our weaknesses and failures; we are the sum of the Father's love for us and our real capacity to become the image of his Son.” During the same World Youth Day, John Paul II had previously taken up a theme of Vatican II and applied it to Catholic youth today: “You are the future of the Church. You are the Church.” Thus, it is in our very nature as Church to be the image of Christ in our world, to be hope for the world, to be salt of the earth and light of the world. However, to live up to our nature, given by God for the good of all, is not easy. Jesus warns us of the danger of salt losing its taste, or of the light being hidden. For many the Gospel has become insipid, its values seen as foolishness or its proclamation seen as ineffective. The Biblical Greek word for the salt losing its taste is moranthe, the same root that gives us “moron” in English, while the modern Italian equivalent is insipido. 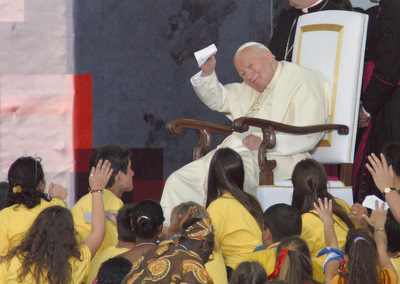 Therein lies the challenge of proclaiming the Gospel in word and especially in deed. Such has been the example of Salt + Light Television, where I have had the privilege of working for the past four months. Here, the Gospel is lived; it is anything but insipid or foolish, but is announced with clarity, with intelligence, with joy, and with charity. Therefore, my colleagues at Salt + Light give me great hope for the future of our Church. My internship at Salt + Light began and ended with the intense and almost constant onslaught of stories over the news wires of clergy alleged to have abused or failed to protect minors. Such examples present in such a horrific manner are to be deeply lamented. As Church we must seek repentance for these grave crimes. Yet as John Paul II, in the same World Youth Day 2002 Homily I cited above, reminded us eight years ago:

Even a tiny flame lifts the heavy lid of night. How much more light will you make, all together, if you bond as one in the communion of the Church! If you love Jesus, love the Church!

At Salt + Light, I have worked among people who have been more than a “tiny flame,” but indeed an undying fire of love. That flame of the Holy Spirit present at Salt and Light, a vibrant example of love of Jesus and of the communion that is Church, made it a joy to come to work every day. Over the last four months, I was able to help in the preparations that this television network is making for the beatification of John Henry Cardinal Newman on September 19 and for the canonization of Brother Andre Bessette of Montreal on October 17. Many days of writing, of research, of transcription, and of translation of documents and of interviews gave me a chance to apply my linguistic abilities in French and in English to the ministry that is Catholic media, but a greater language exists yet: the language of love. St. Paul once wrote to the Corinthian Church: “The love of Christ urges us on.” (2 Cor 5:14) That language of the love of Christ resonates from the very heart of Salt + Light and in all those involved in its project of evangelization. It is that energetic love -- God’s heart in dialogue with the heart of humanity -- that John Henry Cardinal Newman acknowledged in his episcopal motto, Cor ad cor loquitur -- Heart speaks to heart. That same inspiring love is at work at Salt + Light. For that reason I am profoundly thankful for my experience and my co-workers over the past four months. I am convinced that at Salt + Light there are many saints of the caliber of Brother Andre and of John Henry Newman. For the past four months I have been a part of a work abounding from hearts united to the heart of God. I pray for God’s continued blessing upon the staff of Salt + Light and upon their work. To all at Salt + Light Television: Thank you for your joyful example of faith. You have been a source of immense hope for me and for our Church. Together, let us be hope. Let us be Church. Let us be salt of the earth and light of the world. Warren Schmidt, CSB - WYD Photo: CNS/Nancy Wiechec