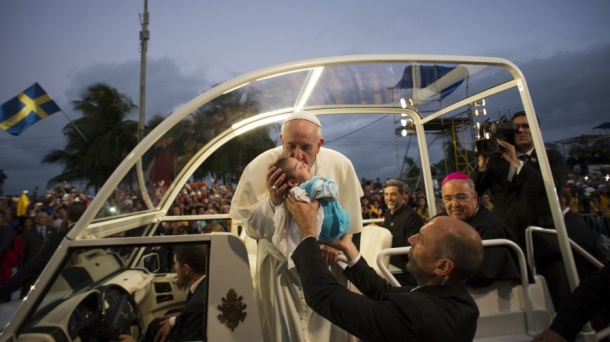 In a press conference held on Tuesday, July 30th, Archbishop of Rio and Chairman of World Youth Day Rio2013 LOC, Orani Tempesta, gave a positive assessment of the event. According to him, Pope Francis wowed everyone with his simplicity and his desire to always be near the people. "It is God who makes things. We had changes since the announcement that WYD would be held in Rio de Janeiro. Even the Pope changed, but we managed to make a beautiful World Youth Day and serve all youth," he said. The Archbishop thanked the dedication of the volunteers, host families and all those involved in WYD. He also stressed the warm welcome Brazilians gave to all pilgrims. "Copacabana never saw so many people at peace, happy and committed to building a better world. It was an event without violence, depredations. And these positive signs we saw in the youth must endure. We want these young people, driven by the World Youth Day, to remain players in a new world," he said. Tempesta also highlighted two special moments of the papal visit. According to him, whenever he passed by the Corcovado by helicopter, Pope Francis prayed and watched with admiration the statue of Christ the Redeemer. On another occasion, the Pope embraced a young child, while traveling by Popemobile to Palácio São Joaquim, in Gloria. "He cried a lot and told the Pope 'Holy Father, I wish you well.' This act moved Pope Francis and showed the love all Brazilians have for him" added the Archbishop. NUMBERS OF WYD RIO2013 More than 3.5 million people participated in World Youth Day Rio2013, which included events in Copacabana, the Quinta da Boa Vista, Rio Centro and various parishes in the city. Audience: July 23: 600,000 people attended; July 25: 1.2 million people attended; July 26: 2 million attended; July 27: 3.5 million people attended; July 28: 3.7 million people attended. 427,000 pilgrims registered, from 175 countries. Countries with the highest number of entries: Brazil, Argentina, USA, Chile, Italy, Venezuela, France, Paraguay, Peru and Mexico. 55% of those registered were women, 45% men. 60% of the public registered are between 19 and 34 years. Registered with hosting: 180.000 approx. Accommodation capacity: 356,400. Approximately 800 artists participated in the Main Events. 60,000 volunteers. 6,500 accredited journalists from 57 countries. 264 locals of catechesis, in 25 languages. 100 confessionals placed in the Vocational Fair and Largo da Carioca. 4 million sacramental bread produced, 800,000 for the Shipping Mass. 644 bishops enrolled, of whom 28 were cardinals. 7814 priests registered. 632 deacons. Economic impact: visitors spent 1.8 billion Reais (Source: Ministry of Tourism) Urban Cleaning: the Comlurb collected 345 tons of organic waste and 45 tons of recyclable materials throughout the week of WYD. This number represents 10% less than it collected in New Year's Eve in 2012/2013.