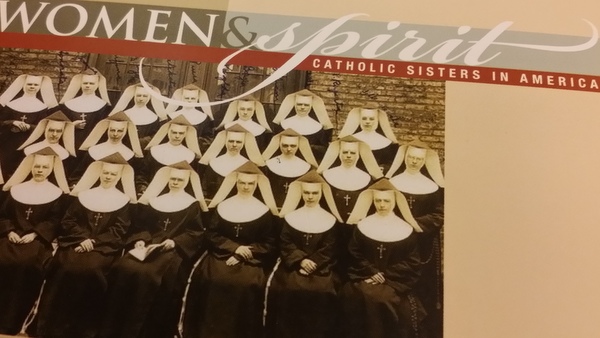 My husband and I watch a lot of historical dramas and one of our favourite games to play is “Catch the Catholic” where we look for Catholics working in the background doing this or that while the main drama unfolds in the foreground. Recently, while watching the HBO series John Adams, the story of the founding of the United States of America, we caught fleeting glimpses of Sisters taking care of the wounded in makeshift hospitals and wading out onto the battlefield. In fact, if you were too engrossed in the main characters you’d have missed them altogether. But we saw them, and my husband and I were pretty chuffed with ourselves for having spotted them! It’s a shame though that these courageous women aren't recognized and celebrated more considering the magnitude of their contribution. When you think about it, these women were just as important to building the New World as the likes of George Washington or Thomas Jefferson. Against formidable odds, these women  were on the front lines running schools, hospitals and orphanages. And it was these same women who nursed the sick during epidemics, ingeniously created health insurance for loggers, and founded Alcoholics Anonymous. In a time when women were afforded little education, opportunity and equality these plucky women corresponded with Presidents pleading the case of those who had no voice. That’s a lot to be thankful for! So I invite you to watch the premiere of Women & Spirit: Catholic Sisters in America, a documentary narrated by Cokie Roberts. Tune in on Thursday March 27, 9pm ET/6pm PT to celebrate the incalculable contribution women religious have made to the founding of the United States of America.