Deacon-structing WYD: Proclaim it from the Rooftops 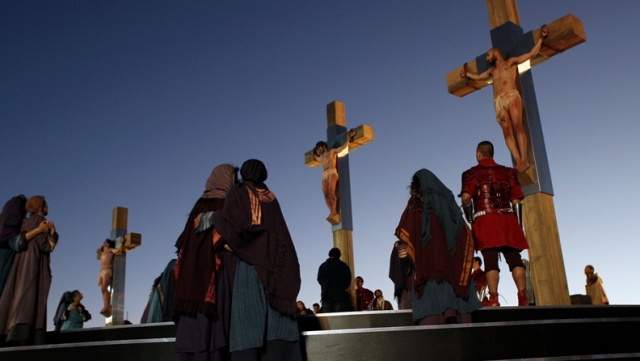 Last week we looked at the importance of pilgrimage of Catechesis and Mary during World Youth Days. In 1993 WYD came to North America: Denver, Colorado, U.S.A. By now WYD is a week-long event, with three Catechesis days, incorporating all aspects of pilgrimage and reconciliation, particularly between the Church and the Native People of North America, and the Way of the Cross. The Way of the Cross was popular in the first centuries of the Church, when people would make pilgrimages to Jerusalem in order to visit the different places of the passion of Christ. In the 15th century, Turks invaded the Holy Land preventing people from making pilgrimages to Jerusalem. And so, people started to pray the “Via Crucis” where they were. Throughout time, Catholic popular culture developed 14 “stations” representing the various stages of the passion of Christ. In Denver, WYD pilgrims were gathered in a stadium while a group of actors moved from Station to Station, bringing them to life and helping the participants enter into the mystery of the Passion. In Toronto we closed one of the city’s main avenues, University Avenue and “took over” the city in order to recreate these final moments of the life of Christ. This is another important part of WYDs: It’s not to "stick all the Catholics in one place" where no one can see them, to “ghetto-ize” them, but to “make the avenues of the city resound with the joy and love of Christ.” In Toronto, Christ was condemned in front of City Hall, and took up his cross in front of the city’s courthouse. He fell for the first time in front of the U.S. Embassy and consoled the women of Jerusalem in front of Toronto General Hospital. He was crucified and died in front of the Provincial Parliament Buildings and was buried in front of the Royal Ontario Museum. Some 300,000 young pilgrims filled Toronto streets and hundreds of thousands others, watched on secular national television (and millions worldwide) while a group of actors moved from station to station. Hundreds of thousands prayed this beautiful Catholic devotion in the middle of a completely secular city. Who says that young people are not interested in Catholic traditions? In 1995 WYD traveled to the South Pacific to the Philippine Islands. The Closing Mass was the largest gathering of Catholics in history, perhaps followed in size only by the funeral of Pope John Paul II. It is interesting to note that it’s never the Papal Welcome Ceremony or the Saturday night Vigil, the most “fun” events, that attract the most people. It’s always the Closing Mass. Young people want to go to Mass. The youth want to celebrate the Sacrament of the Eucharist. That is why every WYD begins with a Mass and concludes with a Mass. Every Catechesis Session ends with a Mass. The Eucharist is the reason why Catholics gather. In 2005, in Cologne, Germany, the Saturday Night Vigil was adapted to include a time of Exposition, Adoration and Benediction with the Blessed Sacrament. This was appropriate for that year’s event since the theme was “we have come to adore Him”. This is another reason why we gather for WYDs: to adore Him and we do so in His Real Presence. It’s clear to see that all those things that make us Catholic are the very core components of every WYD. In 1997, in Paris, France, WYD introduced the Youth Festival. This is one component of WYD that allows young people to be co-producers of the event. In Paris, most of the Youth Festival events were organised by Lay Movements and Associations, and Religious Communities. In Toronto, many of the events were organised by individuals. There were events hosted by Eastern Rite communities, by Aboriginal People and for the disabled. There were more than 900 Youth Festival events: music, dance, theatre, cultural and religious gatherings, prayer meetings, discussion groups and a film festival. WYD is a celebration and the Youth Festival exemplifies this. So what do we have so far? A pilgrimage together, under the Cross, towards Christ, to meet with the Holy Father and the Church, with each other, to learn about, connect with and celebrate our Faith and we do so in a spirit of reconciliation and worship, along with Mary. We can't deacon-struct WYD without looking at Saints. We'll do that next week. - Photo credit: Way of the Cross in WYD Sydney 2008/Getty Images.