Who is John Paul I? God's Smile is Blessed 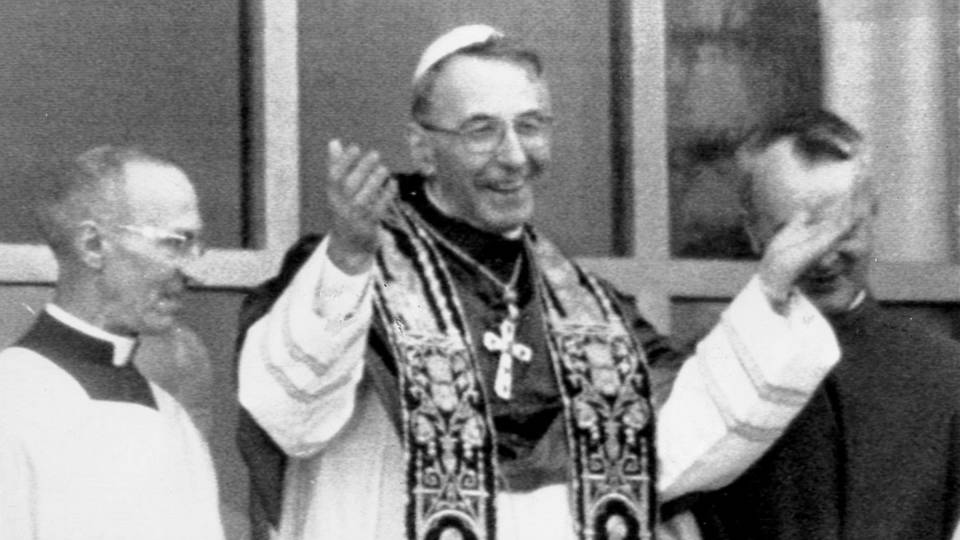 (Source: Wikimedia Commons)
Who is John Paul I? God’s Smile is Blessed It has been said that John Paul I’s pontificate was like a meteor that lights up the sky and quickly disappears. His election as pope was a source of joy after the heavy grief that accompanied the death of Saint Paul VI less than one month before. Spanning only 33 days, his was one of the briefest pontificates but it illuminated the Church, not only for the short time that he was pope but even till this day. John Paul I was pope from August 26th to September 28th in 1978, the year of three popes. As of Sunday, September 4th, 2022, the Church now calls him “Blessed” – not for the length of his service as the Successor of Saint Peter, but for the light that the example of his holy humility and simple joy still shines on the face of the Church and humanity. John Paul I was born Albino Luciani in 1912, just two years before the outbreak of World War I, in the small village of Forno di Canale, nestled in the mountains of northern Italy. In Italian, his first name means “little white” or “little dawn” and his last name refers to “light.” He was the light of a little dawn: a little white light for the Church and the world. While a priest in his home diocese of Belluno, he started a series of talks called “Catecheses in crumbs” (Catechetica in briciole). This reveals the warm fire in his heart for communicating the faith, as well as his characteristic simplicity and down-to-earth sense of humour. When he was appointed bishop in 1958, he chose the motto Humilitas, meaning quite simply: “Humility.” He was the first pope to refuse being “crowned” with the papal tiara. As the first pope with a double-name, he chose his name in honour of his two immediate predecessors: Saints John XXIII and Paul VI. The inspiring humility of John Paul I was not a sad, sullen self-loathing. Rather it was a keen sense of his own littleness in the eyes of God, which served as a bridge of solidarity with all his brothers and sisters in the human family. Being little does not mean that God loves us less, but rather that we are all the more able to reach up and welcome His loving embrace. For John Paul I, God was a Father who loves us as His little ones, with the heart of a mother. He taught that: “God detests failings because they are failings. On the other hand, however, in a certain sense he loves failings since they give to him an opportunity to show his mercy and to us an opportunity to remain humble and to understand and to sympathize with our neighbour’s failings” (Catechesis at the General Audience, 20 September 1978). John Paul I let this tender love of the Father radiate through him to others. After his election as pope in 1978, he told the faithful of the Diocese of Rome: “I can assure you that I love you, that I desire only to enter into your service and to place the poor powers that I have, however little they are, at the disposal of all” (Homily at his taking Possession of the Chair of the Bishop of Rome, 23 September 1978). He spoke of putting great love into the small things in life:

“Love in little things. Often this is the only kind possible. I never had the chance to jump into a river to save a drowning man; I have been very often asked to lend something, to write letters, to give simple and easy instructions. I have never met a mad dog; instead, I have met some irritating flies and mosquitoes. I have never had persecutors beat me, but many people disturb me with noises in the street, with the volume of the television turned up too high or unfortunately with making noise in drinking soup. To help, to be understanding; to remain calm and smiling (as much as possible) in such occasions is to love one’s neighbour concretely without rhetoric” (Letter to Saint Thérèse of Lisieux in Illustrissimi).

John Paul I – the pope of simple light – would offer four teachings during his month-long time as shepherd of the Universal Church. He based his teachings on three “lamps of sanctification” highlighted by his predecessor Saint John XXIII: faith, hope, and charity. He would use examples that were familiar to everyone to speak about faith in a way that resonated with everyday life. A catechist at heart, John Paul I would invite children up to his chair during his public addresses, so as to be close to the people and speak as if having a conversation with them. On one occasion, he tenderly asked a boy: “When you were young, who took care of you when you were sick? Who gave you warm soup or medicine when you weren’t feeling well?” He then pointed out how many elderly people are isolated and lonely: “Afterwards you grow up, and your mother gets old; you become a fine gentleman, and your mother will be in bed, ill. Well, who will bring your mother a little milk and medicine?” And the boy replied: “My brothers and I.” In Italy, John Paul I is known as the “Smiling pope” or “God’s smile.” At the time of his passing, then-Cardinal Ratzinger (now Benedict XVI) said that his “smile conquered the attention and gaze of the world”:

“This smile was not a mask, behind which a person can hide himself nor was it a studied gesture to obtain something, but the expression, unconscious and natural of a soul transparent and luminous to its very depths. Yes, it is not a question of a gift received from nature, but rather something acquired from Jesus Christ, living at an ever-deeper level” (Homily at Mass in memory of John Paul I in the Cathedral of Munich, 6 October 1978).

The smile that illuminated the face of John Paul I is a sign that sharing our faith can pass through the most simple channels to reach others. Let us not underestimate the impact that our humble joy can have on those around us. John Paul I reminds us that the simple joy of evangelizing begins in the little things, like smiling at the people we see as we go about our day. A simple smile can open the door of the heart. Like John Paul I, our smiles are not signs of vague optimism. Rather, they reveal on our faces what lies within our hearts: the warm light of God’s tender love that He wants us to share with the world. The flame of that lamp burning in the heart of John Paul I is a meteor whose glow still brightens the face of the earth. Yes, his pontificate may have only lasted the time of a smile, but his humble joy has the power to inspire us as we share the tender love of God with the world, today and for generations yet to come. As we celebrate John Paul I, let us reflect on the words of then-Cardinal Ratzinger:

“Time has been transformed. By the action of the Lord it has become the history of God, men who proceed from that history and who accompany us, consoling us, acting as our guides, as symbols of hope and faith. Time is no longer the net of death, but rather the hand of God’s mercy held out, who supports and seeks us. His saints are the columns of light who show us the way, transforming it certainly into the path of salvation while we pass through the darkness of earth. From now on John Paul I will belong to that light. The one who was given us for only 33 days; from him, however, there shines a light which can no longer be taken from us. It is for this that we know want to thank the Lord with our whole hearts. Amen.” (Homily at Mass in memory of John Paul I in the Cathedral of Munich, 6 October 1978).

Blessed John Paul I, pray for us to be God's smile amidst the joys and challenges of our world today.