When the News Comes to Life 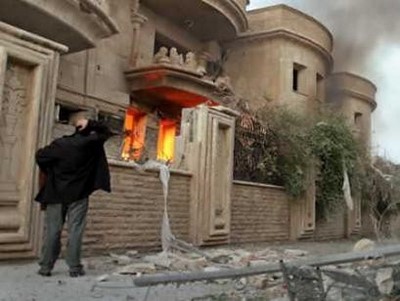 Monday's news story of a car bomb exploding in front of Our Lady of the Sacred Heart Church in Baghdad brought two things to mind. The first thing was a story I wrote for CNS approximately two years ago about the killing of a priest and three deacons in front of the Church of the Holy Spirit in Mosul, Iraq. I remember writing that story from the safety of the Rome office where I was posted, and being horrified by the details of the attack and attempted bombing yet at the same time feeling unable to understand what it means to live with that kind of constant threat hanging over one's head. In that same article I also wrote that Pope Benedict had sent a telegram of condolence to Archbishop Paulos Faraj Rahho. Archbishop Rahho, you might recall, was kidnapped and killed in February 2008. Still, when I covered the story of Archbishop Raho's death I couldn't imagine living with that constant threat of violence and death hanging over one's head and having to go about one's daily life with some semblance of normalcy.
Then a second thing came to mind. In Vancouver this past December I had the chance to meet Iraqi refugees. I was privileged to be at the airport when an Iraqi family of five arrived from Syria on December 18th, 2008. While waiting I spoke to Fr. Sarmad, pastor for the Iraqi Catholic community in Vancouver. He is soft spoken with a gentle demeanor, but as he tells his story his voice takes on an urgency. Fr. Sarmad was wholeheartedly devoted to the Catholic community in Iraq and didn't want to leave. But two attempts on his life finally changed his mind. I was further shocked when he mentioned that his aunt had passed away back home. After offering my condolences and asking if she had been ill, he casually said, "no, no. You know that car bombing that was in the news last week?" and explained that his aunt had been killed by the car bombing that had happened just days earlier. Suddenly that article I wrote two years ago was real. I could look into the eyes of someone who had lived with that fear hanging over his head and escaped alive only by the Grace of God. All of this came back to me while reading this week's news about the bombing in Baghdad and knowing that somewhere there is a family mourning, there are survivors living in fear, and there is probably a community somewhere in Canada feeling the pain and fear they thought they'd left behind. - Top left photo: AsiaNews