What is the Anglican-Use Mass? Find out this Sunday, June 22. 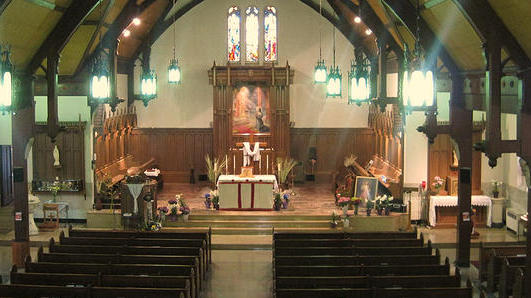 It’s unlikely many Catholics have heard of an Anglican-Use Mass or the even more rarified term Anglicanorum Coetibus which is Latin for 'Groups of Anglicans'. For those of us who may have heard the term in passing, curiosity might have begged an explanation, but I expect many did what I did and thought what the heck is an Anglican-Use Mass and then went back to scrolling through my Facebook feed. But when I kept seeing the term over and over again I had to know: what in world does that mean? Are we talking about Catholics or Anglicans here? When I first heard the term spoken out loud I thought they were saying lazily “Anglican Youth Mass”, which was weird, cause it was a bunch of Catholics chatting about liturgy. Jokes aside, the long and short of it is: they're both. They're Catholic but they've been allowed to retain their Anglican patrimony (another fancy way of saying they've kept their unique liturgical identity). When these groups of Anglicans petitioned the Holy Father to become Catholic they wanted to preserve their musical, liturgical, and cultural traditions, and so Pope Benedict XVI made provisions for them. If you're interested to find out how this all came about read this . Kinda awesome, huh? These days it’s much more common to hear about Eastern liturgical rites (and if for some reason you don't know what I'm referring to watch this) You know, like those Ukrainian Catholics who I always think are Orthodox. But Western rites exist too!  Don’t take my word for it. Here are some examples: the Ambrosian rite, Carthusian rite, Mozarabic rite, and so forth. Naturally we would incorrectly assume that all these Western rites fold under the Latin rite but au contraire! The Latin rite is actually type of Western rite. And what’s cool about these other Western rites is they're in full communion with Rome so we can attend their liturgies, receive Holy Communion and fulfill our Sunday obligation. So folks, be sure to pencil in “visit Mozarabic Rite” next Sunday.  All of these fascinating tidbits of liturgical trivia aside, this whole Anglican-Use thing, is a thing of beauty. Personally, having grown up as the only Catholic within a predominately Anglican family and having been educated inside an Anglican diocesan school, the inclusion of the Anglican-Use rite is special, almost like a homecoming. I recall how interesting it felt to be singing and celebrating a form of Mass which my English ancestors would celebrated for hundreds of years. The Toronto mission for the Personal Ordinariate of the Chair of St Peter began when a group of Anglicans began discussions in 2010, not too long after Anglicanorum Coetibus was released in 2009.  They began regular instruction and study meetings at the Newman Centre (U of T) in 2011 and the first members were received into full communion by Archbishop (now Cardinal) Collins that same year at St. Michael’s Cathedral.  The group began celebrating Sunday Sung Mass according to their rite at Sacré-Cœur Church in May 2012.  The parish priest for the St Thomas More Ordinariate Parish is Fr. John Hodgins, a former Anglican priest and teacher. His wife is Jane, also a teacher. Fr. John was dispensed from the rule of celibacy by Pope Francis and was ordained a deacon by Cardinal Collins and soon after a priest by Archbishop Prendergast of Ottawa.  St. Thomas More Ordinariate plans to share facilities with Sacre-Coeur Church for the forseeable future as they work towards implementing a home-schooling program beginning this fall called the Baldwin Academy. (Public information meeting at STM, Saturday, June 28 at 11 :00 AM.) This is actually really cool as St. Thomas More started a small academy in his home in the 16th century to ensure his children were properly instructed in both temporal [worldly] and spiritual affairs.  Aside from that, what's particularly interesting about this small but growing association of faithful is that they come from a variety of backgrounds, not just Anglicans! Their parish is worth visiting at least once, especially if you're a lover of traditional English hymnody. This community is led by an excellent choir directed by Peter Mahon (Tallis Choir). In fact, this Sunday @ 1:45 pm June 22 Monsignor Jeffrey Steenson the Ordinary of the Personal Ordinariate of the Chair of St. Peter (POCSP) is visiting. Usually Msgr. Steenson is situated in Houston but part of his responsibilities includes travels to the widely scattered missions of the Ordinariate which include over 50 priests and several thousand faithful. Its worth the trip to Sherbourne and Carlton! It’s a great way to grow in your faith, celebrate the beautiful diversity of our Catholic Church and make new friends.