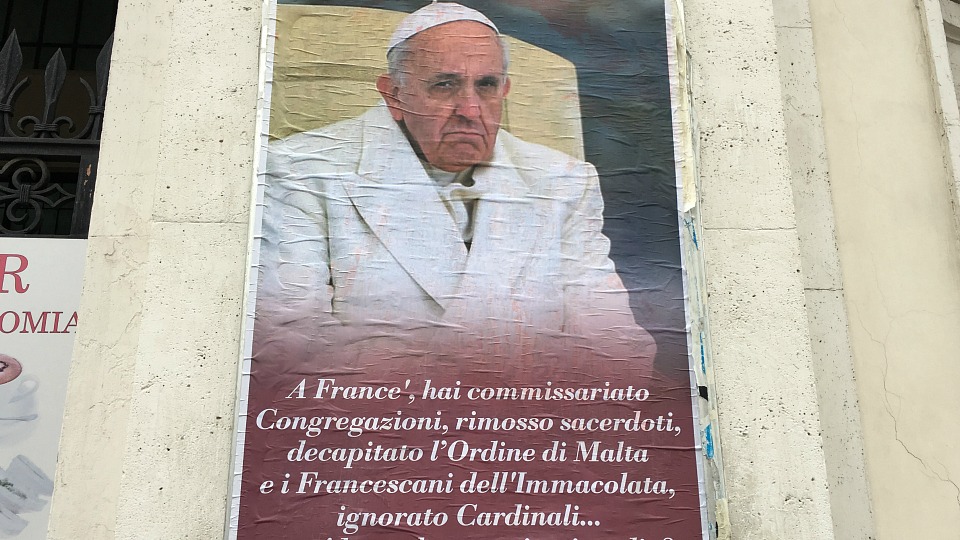 CNS photo/Paul Haring
Dozens of poster posted by anonymous protestors opposing the Pope were plastered along streets in the center of Rome last Saturday morning. The posters depict a very stern looking Pope Francis and a clear message - criticizing some of his policies, and referring to specific events, such as the most recent events concerning the Order of Malta. The message ends with a question to the Holy Father: “Where’s your mercy?” an element apparently lacking in this pontificate, according to the protestors. The local Police immediately covered the posters and indicated that these posters were abusive; however, many of the images were already torn by passersby who disagreed with the message. DIGOS, or the General Investigations and Special Operations Division of the Italian Police, is currently investigating the situation. They are looking at recordings from street cameras in the surrounding areas, hoping to track down the individuals involved. It is not difficult to assume that the initiative came from within circles strongly opposed to the Pope’s teaching and to his reform efforts. Cardinal Agostino Vallini, the Pope's vicar for the Diocese of Rome, reacted saying, "These anonymous, irreverent and negative posters in some streets of Rome, against the work of Pope Francis, provoke sadness.” “The faithful of the Christian community, along with all the inhabitants of the city" – he continued – "do not identify themselves with these insinuations and renew their sentiments of esteem, respect and gratitude to the Bishop of Rome, for his work of evangelization and for his closeness to the people, especially to the poor." Father Antonio Spadaro, director of the Italian periodical La Civilta Cattolica, said that these attacks do not disturb the Pope’s serenity and these protests are actually a “sign that he’s doing well and causing a lot of annoyance… they’re trying to separate him from the heart of the people but the effect is the opposite!” Even Cardinal Marc Ouellet, Prefect of the Congregation for Bishops, reacted to the events. He said the posters are the work of the devil and only seek to divide us.

For more on the vandalism at the Vatican, catch Vatican Connections with Emilie Callan Fridays at 8 pm ET!