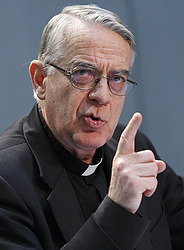 The question of the sexual abuse of minors by members of the Catholic clergy has continued to receive wide coverage in the communications media of many countries, especially in Europe and North America, coverage which has continued over recent days following the publication of the Pope's Letter to the Catholics of Ireland. This is no surprise. The nature of the question is such as to attract the attention of the media, and the way in which the Church deals with it is crucial for her moral credibility. The truth is that the cases that have come to public attention generally took place some time ago, even decades ago, although recognising them and making amends with the victims is the best way to restore justice and to achieve that 'purification of memory' which enables us to look to the future with renewed commitment, with humility and trust. A contribution to this trust comes from the many positive signals emerging from various episcopal conferences, bishops and Catholic institutions in different countries on the various continents: directives for the correct handling and prevention of abuses, which have been reiterated, updated and renewed in Germany, Austria, Australia, Canada etc. In particular, one piece of good news is the seventh annual report on the application of 'Charter for the Protection of Children and Young People' of the Church in the United States. Without indulging in misplaced congratulations, we cannot but recognise the extraordinary preventative efforts being undertaken, with numerous formational and training courses both for the young people and for pastoral and educational staff. And it must acknowledged that the number of accusations of abuse has dropped by more than 30 percent over the last year, and most of them concerned cases more than thirty years old. Without entering into further details, it must be recognised that the decisive measures currently being implemented are proving effective: the Church in the United States is on the right road to renewal. This, we feel, is an important piece of news in the context of recent media attacks, which have undoubtedly proved harmful. But an impartial observer will not fail to notice that the authority of the Pope and the intense and coherent commitment of the Congregation for the Doctrine of the Faith have not been weakened, rather they have been confirmed in their support and guidance to bishops to combat and root out the blight of abuse wherever it appears. The Pope's recent Letter to the Church in Ireland is powerful testimony of this, and contributes to preparing the future along the path of 'healing, renewal, reparation'. With humility and trust, in a spirit of penance and hope, the Church now enters Holy Week asking the mercy and grace of the Lord, Who suffered and died for all.