Using the Media to Evangelize? 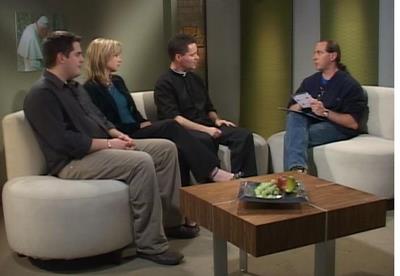 I sometimes wonder if our work at S+L TV would be better served if our programming were to air on another network, a secular network. Don't get me wrong. I passionately believe in the work we do and completely believe in the value of a 100%-Catholic Network broadcasting Catholic content 24/7. Still, it is Catholics who subscribe to S+L: Catholics who are Catholic enough to want to subscribe to a Catholic network. True, we help them learn more about their Faith. We help them connect with the Universal Church. But, who is out there preaching to the non-Catholics, to the non-Christians?This is when I see the value of Mel Gibson's Passion of the Christ, the Narnia movie, or Amazing Grace, or TV shows like Joan of Arcadia and Touched By an Angel. These films and shows are out there for everyone. And anyone can see them, or stumble upon them.Recently a friend, who works in the TV industry, was visiting our studio and we were speaking about different projects. I told him we needed him where he was: producing Catholic-content for the secular broadcasters. Of course, no secular broadcaster is going to air something labeled as "Catholic content," so his projects are "secular", but promote a particular view of the world -- it just so happens that his view is a very Catholic one. It's good. I'm convinced that's the way to do it.Just like him, believe it or not, there are hundreds of Catholic and Christian filmmakers and people in the film/TV industry who are making a difference in what's on the dial and what's on at the cineplex.It reminds me of the work being done in Los Angeles at the "Act One" school. This is a place where writers of faith can go to learn how to write. It doesn't teach them the Faith necessarily, but it teaches them how to write good films and TV series, so that they get produced. Remember, for something to make it onto Television, it has to be entertaining or dramatic - it can't just be solid Truth.There is a also a place in Halifax, supported by the Archdiocese of Halifax, called the John Paul II Media Institute, where aspiring filmmakers can go to learn how to make films, how to use video equipment and do so in an environment that also helps build the Kingdom of God. This is very exciting because it says to our young Catholics: "you can be a filmmaker or TV producer and still be Catholic." They are not exclusive of each other: you don't have to give up one to have the other. When the students graduate and go on to work in film and television, they will do so with a strong Faith.The founding director of the Institute, Fr. James Mallon, and two of the four pillars of the School, Nicole Myshak and Dan O’Rourke recently joined me in the Catholic Focus studio to talk about this very topic: how do we evangelise using the media? Watch it tonight on Catholic Focus at 7pm and 11pm ET, with an encore presentation this Sunday, June 24th at the same times.