On Monday, the S+L blog published an unofficial transcript of Cardinal William Levada's address on the Vatican's outreach to Anglicans. 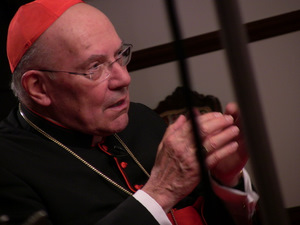 His talk attracted a great deal of attention due to the rarity of a visit to Canada by this high-ranking Curial Cardinal. However, the speech was particularly significant given that the office he charges, the Congregation for the Doctrine of the Faith, is responsible for overseeing the new 'ordinariate' structures that will welcome traditional Anglicans into full communion with Rome. If you haven't yet read this significant address, we reproduce here the final, official text from the CDF.
Note that the Cardinal will be meeting with Pope Benedict this evening. Hopefully, he'll have many positive things to report from his five-day trip to Canada.