Treasures from the Archdiocese of Edmonton archives

By Shamin Malmas Edmonton (S+L) When most people hear the term archives, they conjure up an image of a dark and dusty basement where an unfriendly old historian lurks. But the term is so much broader: Archives can refer to a single document, like a photograph or a letter, an aggregate (or collection) of archival documents, like the personal papers of Bishop Émile Legal, or the physical location where these archival documents and collections are stored – the Archives. The Archdiocese of Edmonton’s archival holdings consist primarily of the administrative records of the Archdiocese dating from the 1860s to the present. We also have records of closed parishes, deceased clergy, past Archdiocesan Commissions, St. Joseph Seminary and Newman Theological College. Our records come in a variety of formats, from paper records to photographs, from bound letter books to cassette tapes, from DVDs to slides, from computer disks to digital photographs. 2012/2013 is an important year for the Archdiocese – we are celebrating our 100th Anniversary! On November 30, 1912, the Diocese of St. Albert was divided to create, out of its southern portion, the Diocese of Calgary and, out its northern portion, the Archdiocese of Edmonton. At the same time Bishop Legal was appointed the first Archbishop of the newly created Archdiocese of Edmonton. 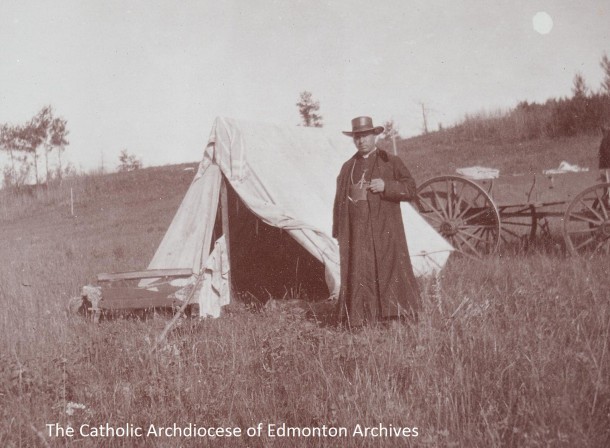 Caption: Archbishop Legal travelling, ca. 1910. Archdiocese of Edmonton Archives. The news of the creation of the Archdiocese of Edmonton was announced to Bishop Legal in a Bull (an official document written on vellum affixed with a seal of the Pope, created by the Vatican to announce a significant event, like the appointment of a Bishop or the creation of an Archdiocese).  The Bull did not reach Legal until February 7, 1913. Two days later, in his personal diary Legal recorded the following: “Public reading of the Latin Bull in French and English translation.” Here Legal is referring to the official announcement which was read during Sunday Mass on February 13, 1913, in the parish of St. Albert (St. Albert, Alberta) and the parish of St. Mary (Calgary, Alberta). 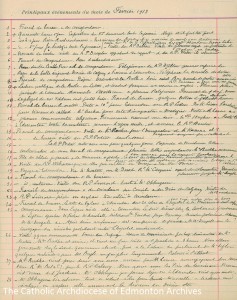 Daily Journal of Archbishop Legal, 1913. Archdiocese of Edmonton Archives.
It’s through the work of archivists that archival documents, like the photograph and the diary entry, displayed above, exist. One of the most important responsibilities of the Archivist is to ensure that records which have administrative, business, legal and/or historical value are cared for so that they may be accessed by future users. The Archdiocese Archives are regularly used by Archdiocesan staff and members of the general public who seek information for a variety of reasons including family and community history, institutional memory, and current administrative duties. The primary source materials preserved in the Catholic Archdiocese of Edmonton Archives are an invaluable record of the establishment of the Catholic Church in Alberta.   Next Month: Taking a stroll in Alberta through the eyes of the Archbishop Legal, ca. 1880-1920. ----- Photos courtesy of the Archdiocese of Edmonton Shamin Malmas is the Archivist/Records Manager at the Catholic Archdiocese of Edmonton. She is a graduate of the University of British Columbia’s School of Library, Archival, and Information Studies and holds a Master’s in Library and Information Studies and a Master’s in Archival Studies.  She works with Archdiocese staff to organize their current records and ensure the timely transfer of non-current records of permanent value to the Archives.