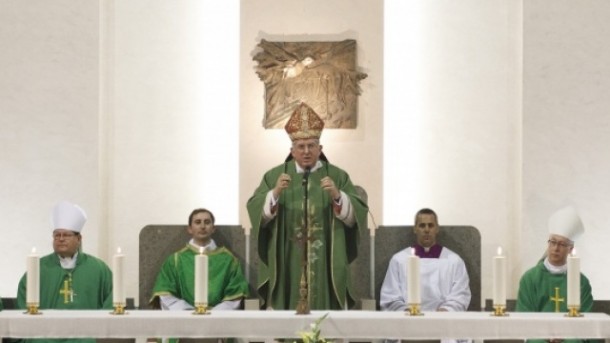 Far away from the comfort of our television screens, tablets and newspapers, a tragedy continues to unfold in Iraq. Islamist extremists, intent on eliminating any trace of Christianity, have cast out tens of thousands of Christians, a people with an almost 2,000-year history in the region. Shortly after I began my mission as Archbishop of Toronto, 7 years ago, the Archbishop of  Mosul visited me and shared his hopes for caring for his community. He wanted to build a little school, and we tried to help him. He also told me of what his people were suffering even then. Now Mosul, one of the oldest Christian communities in the world, is devoid of any trace of Christianity. Churches have been desecrated and destroyed. Families have been told they must convert to Islam or die. Scenes unfold daily of residents forced to flee their homes, stripped of their possessions, right down to the crosses around their necks, while others are murdered, martyrs literally laying down their lives for their faith. In 2003, there were an estimated one million Christians in Iraq; some suggest that no more than 150,000 remain today. U.N. Secretary-General Ban Ki-moon has stated that this persecution could be considered a “crime against humanity”. Iraqi Christians have been begging the world to help them. It is fair to question whether the world is listening? From a distance, we ask ourselves, what to do? It is good that our Prime Minister has condemned this violence in Iraq. We can urge the Canadian government to use its full diplomatic influence to support the demands of the Archbishops of Mosul, led by His Beatitude Patriarch Mar Louis Raphael Sako. These faith leaders have urged the Iraqi national government to: In Canada, I appeal to our government to expand available spaces for Iraqi Christians seeking refuge in our country, and to remove any bureaucratic impediments to their reception. The Catholic Archdiocese of Toronto, through the generosity of our parishes, has sponsored 820 refugees from the Middle East, many Iraqi Christians, over the past three years. As the largest Canadian private sponsor of refugees from the region, we stand ready to welcome more, with parishes mobilized to facilitate sponsorship and settlement at a moment’s notice. Let us accelerate the process at once. We would do well to follow the lead of countries like France, that have announced publicly their intention to provide asylum for those who are persecuted. Canada should take immediate action to provide a safe haven for those forced to flee their homeland. In Iraq, religious freedom is not just being tested; it is being assaulted. As always, we join in prayer and solidarity with our Christian brothers and sisters in Iraq. In the words of Pope Francis, “Violence will not win over violence. Violence is won over by peace!” Let us pray for an authentic peace in Iraq and in so many other troubled places in the world.