Tonight on Perspectives: Should we tell our kids about Santa?

First of all, this week’s episode of Perspectives is the first one to ever merit a “viewer discretion” advisory at the onset! And not without due reason; we have come to discover that many people have strong opinions about Santa and about the version of Christmas that he represents (particularly those under 12 years old). In fact, even after the cameras stopped rolling in the studio, the zealous debate continued! This ruddy and round old soul is more than beloved; for us North Americans, he has become a cultural icon. 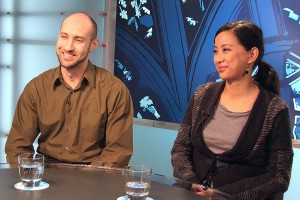 Many children are devastated when they learn that their chimney is not frequented each year by a friendly man in red and white and so this begs the question: “Should we tell our kids about Santa?” Is this lying to our children? This question generated the most discussion of perhaps any other Perspectives question to date. Many parents (Christian and non-Christian alike) have moral qualms about perpetuating a lie for the sake of the “magic of the season”. Warren Francis Dungen writes: “We educate our 4 boys about St. Nicholas and tell them that Santa Claus is not real (made up). We refuse to lie and buy into the commercial interpretation of Santa Claus. If there are redeeming qualities of Santa - they all are found in St. Nick, not the Coca-Cola version. We do not lie to our kids about Santa, the Easter Bunny or the Tooth Fairy - sorry.” Meanwhile, Vincent Solyak writes: “Yes, as long as there's a BUT at the end of the explanation about Santa...leading therefore to the REAL meaning of Christmas...” Join host Pedro Guevara Mann as he welcomes designer and mother of two Lisa Canning and Patrick Douglas, father of six for a heated discussion on the Santa myth and on how parents can crystallize the real meaning of Christmas in little minds. That’s Perspectives tonight at 7pm and 11pm ET, 8pm PT.