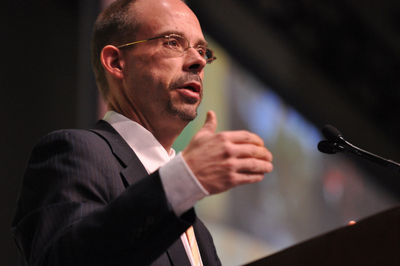 Have you been following the Synod of Bishops? This year’s synod facilitates the unique overlap of two sacred centres, as the leaders of the Church in the Holy Land meet in the Vatican.
To keep up with the developments, I check a few resources daily, such as Catholic News Service and the Vatican Information Service. I also never miss the prolific Vaticanista John L. Allen Jr., who, to date, has filed twelve stories on the synod in the span of just six days—each of them a fascinating read. His latest article reports on the lone Canadian delegate, Archbishop Thomas Collins of Toronto. As an avid reader, I was among the enthusiastic audience assembled for Allen’s recent appearance in Toronto. Allen was the guest speaker for the 2010 John M. Kelly Lecture, sponsored by the University of St. Michael’s College and Salt + Light Television. The room was filled to capacity for his presentation, titled "Covering the Vatican and the Church: A Vaticanista Reflects on Challenges Facing the Church Today". For those who could not be present live, S+L is airing the lecture tonight at 8pm ET / 11pm PT, repeating Wednesday at 1pm ET / 10am PT.