The worst calamity of all | Word Alive 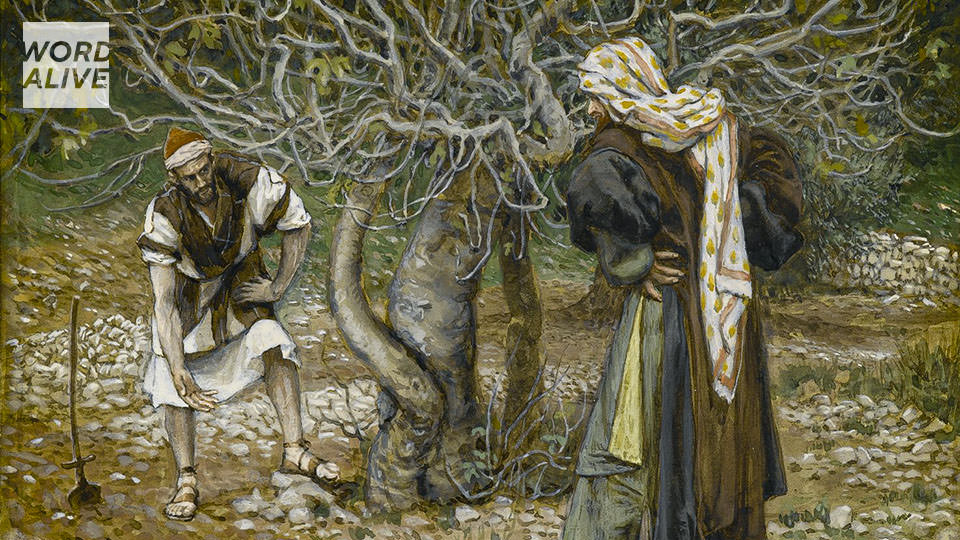 Detail of The Vine Dresser and the Fig Tree by James Tissot. Courtesy of the Brooklyn Museum.


The worst calamity of all

A reflection for the Third Sunday of Lent, Year C

It is a tricky business to try to read the will of God into current events. And today’s Gospel reading offers us a stern warning in this regard. In it, Jesus categorically rejects the temptation to read the misfortune of others as evidence of God’s displeasure or punishment. And, just as we cannot presume that the misfortune of others speaks to their sinful condition, we should not imagine that our own present good fortune follows from our own rectitude. This Gospel reading follows a typical pattern. There is some public discussion or exchange on a given topic followed by a saying or parable of Jesus. One of the fascinating things about reading the Gospels is that it is not always immediately evident to us just what Jesus’ saying has to do with the previous discussion. But digging in to just this question – the connection between the parable and the earlier exchange that occasioned it – will often get us to the heart of the matter. Our episode begins with a group sharing some tragic news with Jesus: Pilate has brutally and sacrilegiously executed a group of pilgrims from Jesus’ home country, Galilee. (Note the foreshadowing of Jesus’ own encounter with Pilate here. Someone comes south to Jerusalem from Galilee and is killed, by Pilate, in a way that somehow implicates – even “mixes” up – the temple sacrifices with political executions.) It is not clear what kind of response this group was angling for. Did they know, maybe from his accent, that Jesus was a Galilean himself? In any case, Luke does not even suggest that they asked a specific question. But Jesus perceives something in their manner that leads to his remarkable, two-fold response. Jesus’ first comment is to reference another piece of tragic news with which his audience is certainly familiar, the collapse of a tower in Jerusalem that killed 18 people. It is here that he absolutely rules out any interpretation of such tragedies as the punishment of God. “Do you think they were more guilty than everyone else who lived in Jerusalem? By no means!” (As an interesting aside, this implies that the explanation for the tower’s fall is natural, not supernatural. Refusing to interpret such events as having divine causes is one reason that a Christian worldview eventually leads to the development of the natural sciences. Later Christian theology would reason that God permits natural tragedies but does not directly cause them.) Jesus then warns that any who do not repent will perish “as they did”. Which raises the question: How exactly did they perish? Jesus clearly cannot mean that if you do not repent, a tower will fall on you.  His whole speech rules out such an interpretation. Rather, he is telling us that anyone who does not repent will perish unawares and unprepared. Death comes for all of us; we don’t know when it is coming, and to face it without repentance is a calamity. Which leads to the second element of Jesus’ response, the parable of the fig tree. Notice the contrast with the sudden and unexpected execution of the Galileans or the collapse of the tower. The fig tree is preserved from its fate, at least for now, by the gardener. Our first instinct might be to identify God with the owner of the orchard. And this is not wrong. In the Old Testament, God is portrayed as the owner of a vineyard or orchard, which represents Israel. Jesus tells several parables that rely on this image. But God is also a gardener in the Old Testament. Indeed, long before God forms Israel as a people and adopts it as his own, he creates a garden – Eden – as a home for humanity. In John’s Gospel, Mary Magdalene even mistakes the risen Jesus for the gardener – which, of course, he is! In the parable of the fig tree, then, God is not the one who brings tragedy, as those who brought the news of the murdered Galileans may have imagined. Rather, God is offering us grace – cultivating the soil and fertilizing it – so that the judgment to which we ourselves are heading might be averted. It is easy for us to imagine that the action of God in history is one of punishing the wicked, especially the wicked who are not like us. In response to such thinking, Jesus teaches, first, that we are no better than those who suffer and that tragedies are an invitation to get our own house in order, not to speculate about the state of others’ souls; and second, that the work of God in history is not that of dropping towers on sinners but of offering us grace every day so that we might avoid the worst calamity of all.

Brett Salkeld is Archdiocesan Theologian for the Roman Catholic Archdiocese of Regina. He is the author of several books, including, most recently, Transubstantiation: Theology, History, and Christian Unity. He lives in Regina with his wife, Flannery, and their seven children. His weekly podcast, Thinking Faith! (with Deacon Eric Gurash) can be found at https://thinkingfaith.libsyn.com.