The World I Know

In 2007, I began working on a project commissioned by the Dufferin-Peel Catholic District School Board in Ontario: to create 10 short vignettes that would highlight how 10 virtues (which they had pre-selected) are being put into action in their school communities.  We called this joint venture The World I Know:  Virtues in Action.  It became so much a part of my life from 2007 to 2009 because I saw the great good that could come out of it. 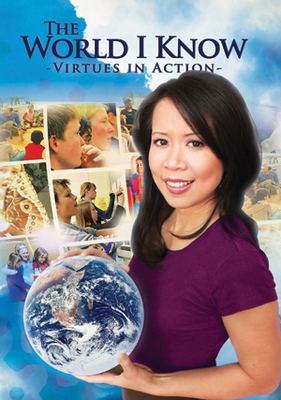 This project was very well-received by the Dufferin-Peel CDSB schools and by other school boards.  Salt + Light then decided to create 10 half-hour episodes of virtues in action.  To these vignettes were added 10 real-life testimonies from high school students about their struggles with living virtuously, as well as 10 stories of how saints have inspired the vocation of young priests and religious in the living out of the virtues. It’s been a while, but FINALLY, the DVD set that contains the 10 half-hour episodes is out!!! I very much encourage schools, students, youth groups to check this out, not because I worked on it, but because….  there’s no better way to teach about the virtues than to show virtues LIVED.  In a time when our young people really need role models of authentic Christian living, it is refreshing and inspiring to meet people who admit they struggle with the challenges of living a Christian life, but they do it anyway. Find out more about The World I Know: Virtues in Action, by going HERE.