The true story of the feast of Corpus Christi 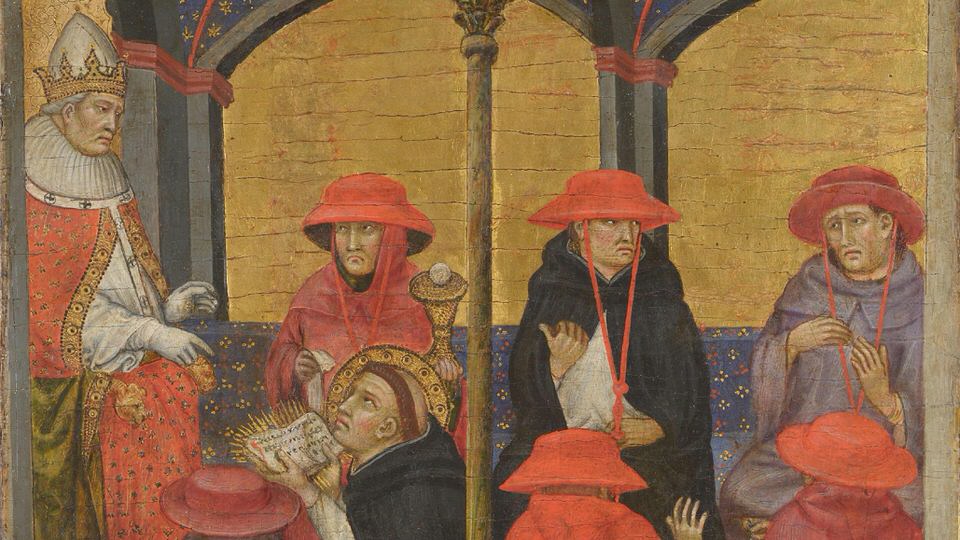 Saint Thomas Aquinas Submitting His Office of Corpus Domini to Pope Urban IV by Taddeo di Bartolo. Image courtesy of the Philadelphia Museum of Art.
There’s a great story about how the feast of Corpus Christi came about. You’ve probably heard it before. It involves a doubting priest, a pope, and one of the most celebrated saints of the medieval Church. One day in the 13th century, a priest was on his way to Rome on a pilgrimage. He stopped in the town of Bolsena where he said Mass. He happened to be plagued by doubts about the Real Presence, and lo and behold, as he elevated the host, it began to bleed. The priest immediately put a halt to Mass and rushed off to nearby Orvieto to tell Pope Urban IV (who happened to be staying there at the time). Having seen the evidence, the pope declared the event to be a miracle and decided to create a new feast day for the universal Church which would both celebrate the Eucharist and show all those doubters that they were wrong. He asked the famous Dominican theologian Thomas Aquinas to compose the texts for the Mass and Office for the new feast, and one year later, in 1264, the Church first celebrated the feast of Corpus Christi and has done ever since. It’s a beautiful story. The only problem is, it isn’t true. Or not entirely.   Fake news? It’s true that at some unspecified time, a Eucharistic miracle is believed to have occurred in Bolsena and that the bloody corporal is still venerated in Orvieto Cathedral. It’s also true that Pope Urban IV instituted the feast of Corpus Christi for the universal Church in 1264, and it is generally accepted that Thomas Aquinas wrote the texts (widely considered to be some of the most beautiful ever written). But the two stories aren’t connected. The real history is more prosaic and lacks the razzle-dazzle of the miracle-inspired version, but where the false version puts doubt (and divine intervention) at the centre of the story, the real impetus behind this great feast day was a deep love for and veneration of the Eucharist. And two women made it happen.   Introducing Juliana The story of how Corpus Christi came to be begins not in Italy but in northern Europe: in Liège to be exact (then part of the Holy Roman Empire but now in Belgium). And it was not inspired by priests or popes or theologians but by the fervent devotion of ordinary people, and by the dream of one laywoman in particular: Juliana of Cornillon (also called Juliana of Liège). Like many people in Liège at that time, Juliana had a strong devotion to Jesus Christ in the Eucharist, a devotion that was very much in tune with general trends in medieval European piety towards an increasing focus on Jesus’ earthliness and humanity, especially his suffering and death. What set Juliana apart was an idea she had to create a special feast. At a young age, Juliana began to experience a vision of a full moon with a dark spot, which she interpreted (with the aid of a heavenly voice) as representing the Church with something missing – a yearly feast in honour of the Eucharist. For 20 years she kept this to herself, pondering it and probably working through the theological implications (besides being very devout and an ascetic, Juliana was also a bookworm!).   Juliana and Eve 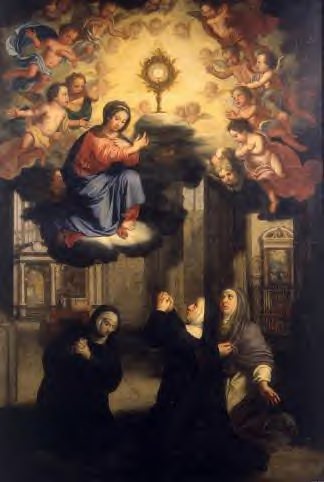 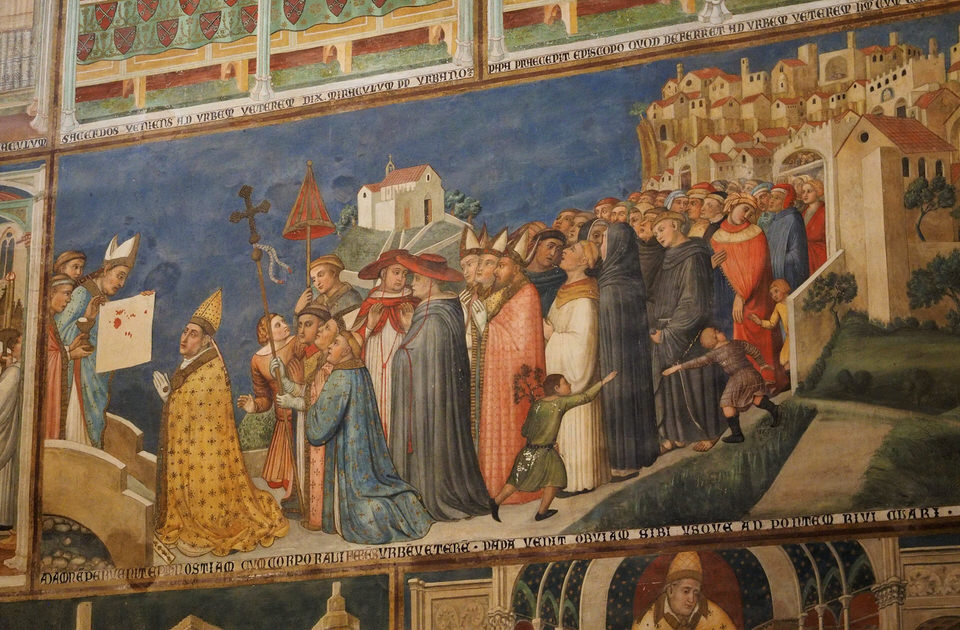 Fresco by Ugolini di Prete Ilario depicting the arrival of the Corporal of Bolsena in Orvieto. Photo credit: Slices of Light, via Flickr.