The Struggle of the Haitian People

The whole world has its eyes, once again, on Haiti, the poorest country in the Americas. 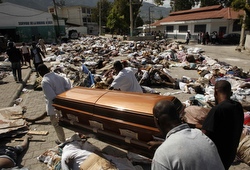 The courage of the Haitian people has again been tested. As all of you already know, last Tuesday, an earthquake, registering at magnitude seven, hit the island nation – the most violent earthquake to hit the country in 100 years. It is estimated that more than three million people have been affected and reports coming in say that the death toll is being estimated at over 100,000. I can’t say that I know a lot about Haiti.  Despite the large Haitian community in Canada – most of them in Montreal – I don’t know many Haitians. But I do know that Haiti has had a history fraught with struggle. The island known as Hispaniola, was colonised by the Spanish – Christopher Columbus first stumbled upon it in 1492 – but the French settled on the western half of the island – what is now Haiti (the other half is now the Dominican Republic). Haiti became the first black republic in 1804 after over half-a-million slaves revolted against their French masters and Haiti declared its independence from France. I heard a story that apparently Napoleon was not happy with the independence and with the support of the U.S. a fine was place on the new government to pay back to France for their loss. Of course, this debt has now been canceled, but the country has been in debt ever since. In 1915 the U.S. invaded (because apparently they thought the Germans were going to build a base there) and stayed for almost 2 decades and since then, the country has had its fair share of heads of state. The one most of us remember is “Papa Doc” Duvalier, who, with his “tonton macoute” militia, ruled with an iron fist. He was succeeded by his son, “Baby Doc’ who was eventually forced into exile in 1986. Growing up in Panama (with our own military dictatorship), I remember hearing about this. The Duvaliers are gone, but things are not necessarily better for Haiti – there have been other dictators and many coup d’etats as the nation tries to get its footing. About 9,000 United Nations peace keepers have been helping maintain the peace since 2004. It's inspiring to see how the world has responded to this crisis, but let's pray that once it's over - once the dead are buried and the rebuilding is underway, we don't forget Haiti. 'This week, as the whole country’s infrastructure has been devastated, with thousands of dead and many more injured and left homeless – we extend our thoughts and prayers to our brothers and sisters of Haiti and may the world not forget the plight of the Haitian people. For information on the CCCB-CCODP's joint effort to provide relief aid, visit HERE. - Photo: CNS photo/Eduardo Munoz, Reuters49