The practice that didn't get away

A Filet-o-Fish billboard?
I couldn't help but notice that this Lent there was a bit of a ad blitz for McDonald's Filet-o-Fish sandwich. Coincidence? Or a marketing strategy aimed at Christians who may be turning to their aquatic friends during the penitential season. It's interesting to note that the sandwich was first introduced for Lent in the early 1960s. A McDonald's franchise in Ohio added the item to cater to its Roman Catholic customers. Or at least that's how the legend goes. (And whilst referring to that legend, it apparently beat out 1963's Hulaburger.  Think a slice of pineapple, instead of a beef patty. Seriously... seriously?) 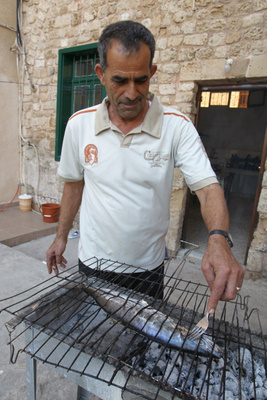 For me growing up, it was always fish on Fridays. We acknowledged it as a simple act of penance -- a small little sacrifice. In later years, as I went out on my own I found it to be a practice that had somewhat fallen to the wayside, trumped by an act of charity rather than abstaining from meat. It was great curiosity then when I read last week about a resolution from the Catholic Bishops Conference of England and Wales. That resolution:

...to re-establish the practice of Friday penance in the lives of the faithful as a clear and distinctive mark of their own Catholic identity.

Every Friday is set aside by the Church as a special day of penance, for it is the day of the death of our Lord. The law of the Church requires Catholics to abstain from meat on Fridays, or some other form of food, or to observe some other form of penance laid down by the Bishops' Conference. The Bishops wish to re-establish the practice of Friday penance in the lives of the faithful as a clear and distinctive mark of their own Catholic identity. They recognise that the best habits are those which are acquired as part of a common resolve and common witness. It is important that all the faithful be united in a common celebration of Friday penance. ... Those who cannot or choose not to eat meat as part of their normal diet should abstain from some other food of which they regularly partake.

There were two interesting things I found in this announcement: I'm sure there will be criticism of this announcement; the Church is turning back the calendar to the 1950s, Churchgoers are more concerned with starving themselves then with the starving poor, etc., etc. But aren't those responses even the result of our own hard-heartedness? (Something that we try and eliminate in ourselves, exactly by means of penance!) And really, to abstain from meat is not asking the world of the faithful. But it is asking the faithful to shift our thoughts from the things of the world, to the sacrifice of Christ on the cross that won us everlasting life. The UK Bishops' resolution will take effect beginning  September 16th, 2011 -- the day the Church in England and Wales marks the anniversary of the visit of Pope Benedict XVI to the United Kingdom. - CNS photo/Nancy Wiechec
English, Welsh bishops reintroduce meatless Fridays  By Simon Caldwell Catholic News Service LONDON (CNS) -- Catholics in England and Wales will be obliged to abstain from meat every Friday under a new rule brought by the bishops. The "act of common witness" will take effect Sept. 16, the first anniversary of Pope Benedict XVI's visit to Britain.