The Funniness of Faith 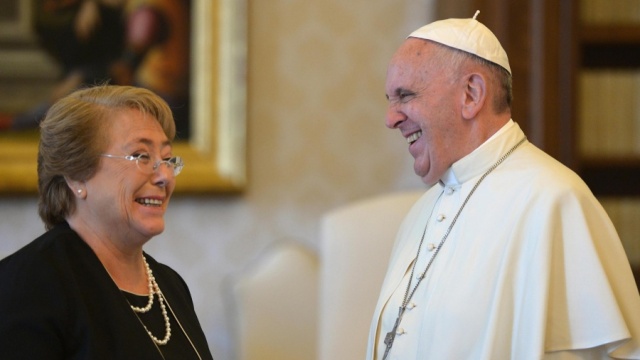 Pope Francis and Chilean President Michelle Bachelet laugh during a private audience at the Vatican (CNS photo/Alberto Pizzoli)
Immediately following the conclusion of Pope Francis’ whirlwind visit to Mexico this week, I switched over to CNN to get caught up on the US presidential race.  As troublesome as it can be to watch things like last night’s GOP Town Hall from Greenville, South Carolina, I stuck it out, and near the end of his set Senator Ted Cruz encouraged a new kind of light-heartedness in politics that has previously been lacking.  “Part of reaching young people is loosening up,” he said.  “You know, would it kill Republicans to crack a joke?!” And after an initial chuckle from the live audience, the punchline: “Actually some of them I think it might!”

I think most people would agree that politics has deteriorated into a rather poisonous, cutthroat world void of much respect and chivalry.  But this unbearable political malaise, coupled with the presence of a few unexpected candidates seems to have awoken the political establishment to an initial realization of the fact that people want politics done differently.  So cracking a joke or showing a little light-hearted authenticity may be just what the doctor ordered.

The same thing could be said for the religious world.  I recently sat down with the well-known comedian Lino Rulli, host of The Catholic Guy on Sirius XM Radio to discuss the matter.  Apart from making me laugh, like Ted Cruz Lino made me think.  “Being serious about faith doesn’t mean being serious in life,” he said, challenging the old supposition that seriousness is the real test of faithfulness.

The conversation reminded me of that great quote from GK Chesterton a century ago that, “It is the test of a good religion whether you can joke about it.”  There’s a deep wisdom to contemplate in that simple phrase, especially in light of the highly sensitive nature of religious beliefs in our world today.  For Catholics specifically, it should focus our attention on a few things.

First, we need to get over the false idea that making a tasteful joke about the faith or laughing about a ridiculous aspect of it somehow disrespects, discredits or contaminates it.  Solemnity is an important characteristic of Catholic practice, but it can’t come at the expense of spontaneous laughter and a bit of fun.  In good Catholic paradoxical fashion, solemnity and levity—seeming opposites—both need to be present in the healthy life of a Christian.  In fact, we could go so far as to say that de-emphasizing levity or comedy results in an exaggerated solemnity which leads to an imbalance.  The Church should always remember that laughter is an effect of surprise which is an attribute of God.

Secondly, the Church needs to witness to this levity more explicitly.  I asked Lino directly what he would say to Catholics who favor solemnity over levity.  “You’re wrong,” he said categorically, “if you walk around with a sourpuss look on your face you don’t really have joy, you don’t have a real gratitude of life.”  It’s important for Catholics today to witness to the “Gospel of joy” as Pope Francis calls it, not for the sake of the Church but for the sake of the world.  In an era of suspicion and widespread cultural and religious ignorance, the Church can be the model of best practice when it comes to living a healthy, balanced, joyful Christian life in which the faith is practiced seriously but no one takes themselves too seriously.

Watch the interview below: