The art and life of Father Stu 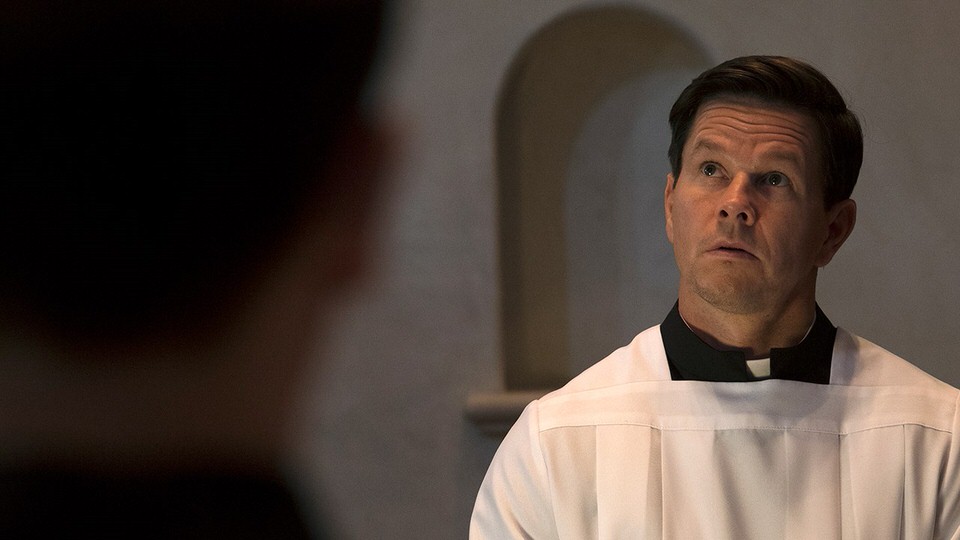 Mark Wahlberg stars in Father Stu, which was released in theatres April 13, 2022. © 2022 SONY PICTURES DIGITAL PRODUCTIONS INC. ALL RIGHTS RESERVED.
Earlier this month, I had the pleasure of being Salt + Light Media’s representative in Helena, Montana, for the premiere of Father Stu, a new film by Mark Wahlberg. In attendance was a mix of local media, Helena residents, and students from Carroll College, a local Catholic college and the real-life Fr. Stu’s alma mater. On the night of the premiere, the red carpet was laid out, Mark Wahlberg and Rosalind Ross were in attendance to speak about the film, and everyone was excited to see a local priest, their local priest, up on the big screen. But in a way they likely never imagined him – portrayed by an Academy Award-nominated actor. Which is rather fitting because once upon a time, their humble priest thought that Hollywood was supposed to be where he made it big. Even before the first frame appeared on screen, I had high levels of excitement for the film for a few reasons. I was really interested to see how a man could go from a hard knock life to become a priest. It sounded like a story from a creative writer's head, not something that actually happened. Another big reason was that I had the opportunity to meet a lot of people who had known the real Father Stu. People who shared their experiences, their love, and their admiration for him with me. I heard stories of tough love, of blunt truth telling, all wrapped within an immense depth of love. Why is this important to note? Because parts in the film where Father Stu was extremely rough and tumble, even abrasive, both Catholics and non-Catholics alike may ask: Was Father Stu actually like this? Did he really give sermons like this? Did the film do him justice? The answer across the board is a resounding yes. The day before the premiere, I was given a lot of insight about Fr. Stu from Fr. Bart Tolleson and the Simpkin family. These were people who had known him from seminary, high school, and their local parish. They shared stories of burpees given as penance in confession, tough-love homilies, and Fr. Stu’s depth of love for everyone around him. They expressed how Father Stu’s fighting spirit and deep faith uplifted their own faith. Through his struggles, Father Stu helped the Helena faithful have a very tangible understanding of what redemptive suffering can look like. And not just on Sundays. But day in and day out, as Fr. Stu pushed himself to be active in the community. 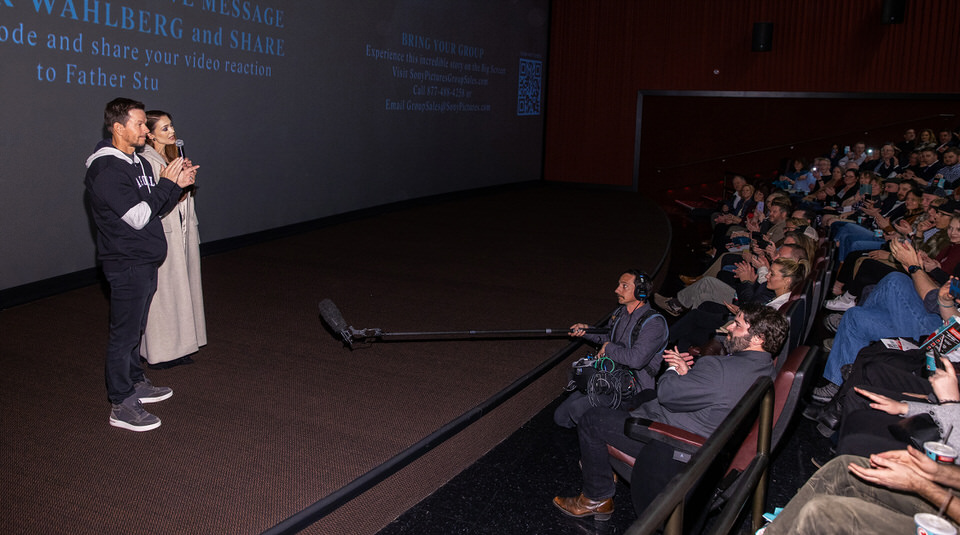 Mark Wahlberg and Director Rosalind Ross speak onstage during a special screening of Father Stu at Cinemark Theatre on April 04, 2022 in Helena, Montana. (Photo by Mat Hayward/Getty Images for Sony Pictures)
Writer/Director Rosalind Ross did a masterful job assembling and recreating the lore surrounding Fr. Stu. One thing I really appreciated about her script was that she leaned into who Fr. Stu was. Where it would have been easy to sanitize his behaviour and language or go over the top with it to create religious pulp, she crafted a composite of Fr. Stu that was true to life enough that his friends and family truly saw him in the big screen portrayal. For those of us who never knew Fr. Stu, the big screen version made him feel accessible and real. Like we too could follow in his footsteps and live out our given vocation wholeheartedly. Her beautifully crafted script serves as a reminder that although we are all called to sainthood, the road – and at times the person on said road – is imperfect. Mark Wahlberg does a spectacular job as Stuart Long both pre- and post-seminary. His pre-seminary version felt a bit reminiscent of roles he’s done in the past: the snarky, comical tough guy. Had I not met people who had known Stuart, I would have assumed he was stepping into a typecast role, but having that additional information helped me understand that the snarky, comical tough guy was Stuart Long to the core. As the movie progressed and Fr. Stu began to experience physical changes in how he looked and moved, Wahlberg’s performance did not leave a dry eye in the house. I found out afterwards that some people had to leave the theatre to compose themselves because his portrayal was so spot on he shattered any emotional walls that people had up. More than one person said it was the gestures and hand movements that Mark mastered in his portrayal that really had them saying: Oh my goodness, that’s Stu! Although I had the benefit of added context from people who had known Fr. Stu, I think that this is a great film for the faith filled and the faith questioning to go see. Fr. Stu reminds us that God will work with us where we are as long as we continually seek Him and remain open to what is possible. Some viewers will find the language in the film rough, but don’t let that be a barrier. Remember that art is a reflection of life and, in this instance, of a life faithfully and thoroughly lived for Christ. Father Stu (rated R for language) is now playing. Check your local theatre listings for show times.

Want to watch Jermaine’s interviews from the premiere of Father Stu?

Check out this month’s episode of behold – now streaming on Salt + Light Plus!