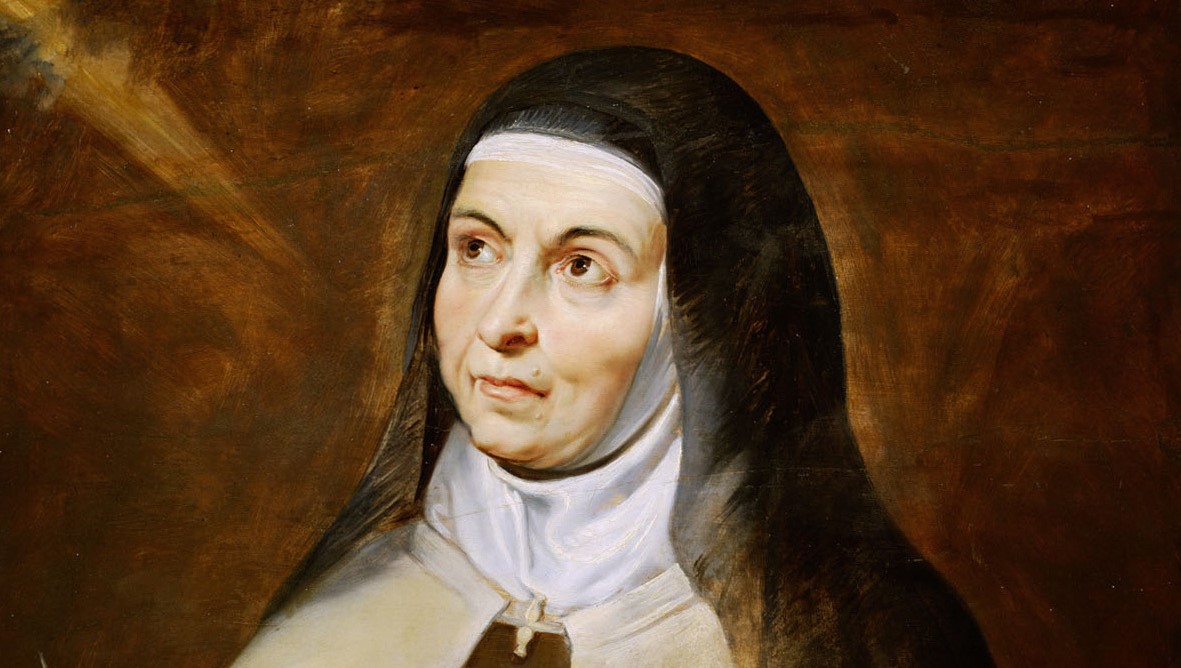 Detail of St. Teresa of Ávila by Peter Paul Rubens (Source: Wikimedia Commons)
Every year between August and October, we are blessed to celebrate the memorials of four amazing women named Teresa (in some form). Each one has a fairly popular following in the Church today, and like all the saints in this series, it’s hard to get them mixed up if you really know them, but if you don’t, it can be really confusing. It doesn’t help that three of them were Discalced Carmelites! (And strangely, quotes are often attributed to Teresa of Ávila, Thérèse of Lisieux, and Teresa of Kolkata interchangeably – even things they never said. So be careful before you repeat quotes you find online!) Unfortunately, looking at four (pretty major) saints in one blog post means that the section on each one will have to be even shorter than usual. But I hope you will feel inspired afterwards to go away and read more about at least one of these remarkable women. So let’s take them in chronological order.

This Teresa lived in a tumultuous time. Two years after her birth, Martin Luther nailed a document to his door in Germany which sent vibrations throughout Europe, officially beginning the Protestant Reformation. In Teresa’s Spain, Jews and Muslims had recently been forced out of the country, and those who had converted, including Teresa’s own grandfather, were subject to scrutiny from the Spanish Inquisition. And on top of that, a land recently discovered far to the west was now being colonized by Spanish explorers. This Teresa is famous for two things: her reform of the Carmelite order and her mystical spirituality. Born into a wealthy family in Ávila, at the age of 20, Teresa joined a nearby Carmelite convent which, as was typical for Carmelite convents of the day, had a very relaxed approach to religious life and enclosure. As Teresa grew in spirituality, she regretted the worldliness of her convent and desired to establish a new one where she could experience greater physical and spiritual poverty. She founded her first convent, San José (St. Joseph), in Ávila, and though there was opposition to her reforms from both inside and outside the order (read about the experiences of St. John of the Cross), Teresa and her followers had enough powerful support that they were able to carry the day, and eventually, they were allowed to separate from their parent community entirely to form a new order: the Discalced Carmelites. But Teresa is probably even more widely known because of her unique, mystical insights, especially as detailed in her books, The Way of Perfection and The Interior Castle, in which she describes the stages by which a soul attains to spiritual perfection and union with God. Although much of what she relates, based on her own experience, is far beyond the comprehension of most of us, nevertheless she has left the Church an invaluable guide to mental, or contemplative, prayer and its possibilities. She was declared a Doctor of the Church in 1970. Her feast day is October 15.

We shall never learn to know ourselves except by endeavoring to know God; for, beholding His greatness we realize our own littleness; His purity shows us our foulness; and by meditating upon His humility we find how very far we are from being humble. – St. Teresa of Ávila, The Interior Castle

Now, it helps a bit that in English we have a tendency to call this saint by her French name, but I do know that somewhere, at some time, she has been called Theresa because I grew up in a parish called St. Theresa, and I never heard her called anything else until much later. The overwhelming popularity of this saint – you can see her statue (she’s the one with the roses) in just about every Catholic Church, it seems, along with St. Anthony of Padua – is one of those mysterious, inexplicable phenomena. When she died, she was 24 and known only to a handful of people: her family and her enclosed community of nuns in northern France. 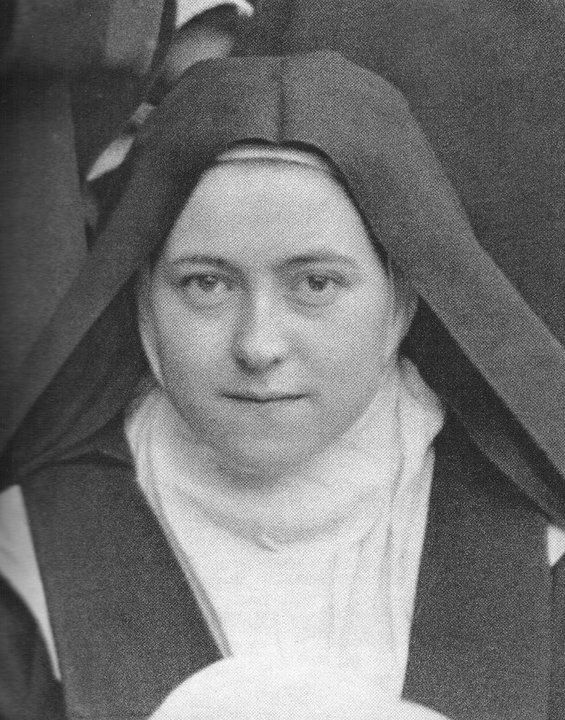 Detail of St. Thérèse of Lisieux in a photograph taken by her sister in the courtyard of the monastery of Lisieux on April 15, 1894 (Source: Wikimedia Commons)
But those who knew her recognized in her a deep wisdom and an insight that could only come from God, and she was asked to write accounts of her life and spirituality. These were later compiled into an autobiography, The Story of a Soul. Though it was only meant to be shared among the communities of Discalced Carmelites after her death, it found its way into the outside world and became a bestseller. St. Thérèse is especially known for her “little way”, which is characterized by a sense of utter humility and complete abandonment before God, turning in child-like trust to God’s mercy rather than becoming absorbed in great feats of self-mortification like the ones found in stories of the medieval saints. And although it certainly sounds more pleasant than fasting and vigils, St. Thérèse’s “little way” – as with any true path to holiness – is not easy! Her spirituality and wisdom have inspired countless people on their path to God and have helped to shape the spirituality of the modern Church. Certainly, without her, the spiritualities of St. John Paul II and Pope Francis may have looked very different. [Her autobiography also inspired another Saint Teresa to become a Discalced Carmelite (Saint Teresa of the Andes), but I thought four saints in one blog post was quite enough!] In 1997, she was declared a Doctor of the Church. Her feast day is October 1.

I am but a weak and helpless child, yet it is my very weakness which makes me dare to offer myself, O Jesus, as victim to Thy Love. – St. Thérèse of Lisieux, The Story of a Soul

I remember when St. Teresa Benedicta of the Cross was canonized. It caused quite a stir in the secular press. Only I never heard her referred to by that name. Back then, we all seemed to call her Edith Stein. And the controversy? It seems some people chose to view her canonization as an affront to the Jewish people rather than what it really was: a celebration of a courageous woman. Edith Stein was born in Breslau, Germany (now Wroclaw, Poland), to a devout Jewish family. Early on, she showed a natural inclination and talent for scholarship, and though her faith waned as her learning increased, the two would soon unite again when she read the autobiography of St. Teresa of Ávila. On the first day of 1922, she was baptized into the Catholic Church. Although Edith was a brilliant philosopher, she was prevented from pursuing a successful academic career because she was a woman. She continued teaching, however, until she was forced to stop under the anti-Semitic laws being imposed in Germany. In 1933, following the lead of her spiritual hero, she entered a convent of Discalced Carmelites, where she took the name Teresa Benedicta of the Cross. She was soon sent with her sister Rosa (who had also become a Catholic and a tertiary member of the order) to a convent in the Netherlands, where they might be safe from the Nazi threat, but in May 1940, after less than a week of fighting, the Netherlands fell and was occupied by German forces. 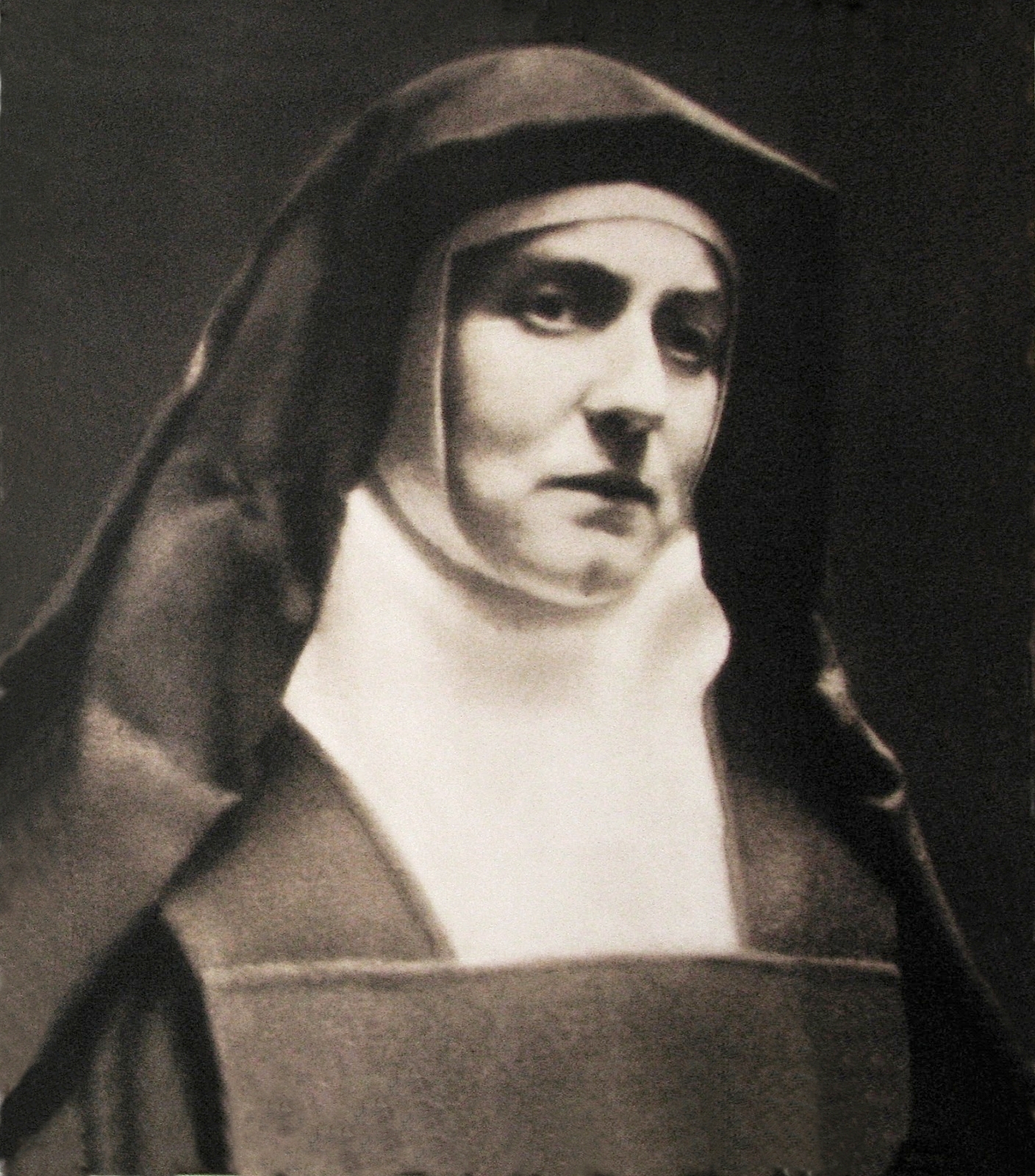 Photo of St. Teresa Benedicta of the Cross (Edith Stein) taken at the monastery in Cologne, Germany, for her passport in 1938 or 1939 (Source: Wikimedia Commons)
In the summer of 1942, the persecution of Jews in the Netherlands reached its height with deportations to concentration camps in Germany and Poland. Christian leaders in the country, who had been outspoken in their rejection of Nazi anti-Semitism, stood up once again. On July 26, a pastoral letter condemning the maltreatment of Jews and asking for prayers for the Jewish people was read from every Catholic pulpit. The response was swift and brutal. Jewish converts to Catholicism – who had hitherto been left in peace – were rounded up, deported, and killed. Priests and religious, especially, were targeted. Sr. Teresa Benedicta and Rosa were arrested on August 2 and are believed to have died on August 9 in the gas chamber at Auschwitz. St. Teresa Benedicta’s feast day is August 9.

I talked with the Savior and told Him that I knew that it was His Cross that was now being placed upon the Jewish people; that most of them did not understand this; but that those who did, would have to take it up willingly in the name of all. I would do that. He should only show me how. At the end of the service, I was certain that I had been heard. But what this carrying of the cross was to consist in, that I did not yet know. – St. Teresa Benedicta of the Cross, "The Road to Carmel"

I think it must be impossible to be a Catholic living today and not know the name of Mother Teresa or be able to recognize her photo at first glance, especially if you were alive in the latter part of the twentieth century. Along with Pope John Paul II, she was the public face of Catholicism for decades. Everyone knew Mother Teresa – the woman who had given up everything to live with the poorest of the poor in the slums of India, the woman who lived the Gospel in a way most of us are too afraid even to dream about. Born Anjezë Gonxhe Bojaxhiu in Skopje, then part of the Ottoman Empire, to an Albanian Christian family, she discerned a call to religious life at an early age. Following a great desire to be a missionary, she left home for Ireland, joining the Institute of the Blessed Virgin Mary (the Loreto Sisters), taking the name Sr. Mary Teresa after St. Thérèse of Lisieux. Sr. Mary Teresa was happily living out her vocation with the Loreto Sisters in India when she heard her famous “call within a call” to go serve the poorest of the poor and to live among them. Having received permission to leave her community and then medical training, she embarked on her new life, serving Jesus Christ among the hungry, the homeless, the lepers, and the unloved in Calcutta (as the spelling used to be). She struggled in the beginning, both with practical concerns as well as spiritual temptations. But she found her way by trusting in the Lord who had called her, and not only that, but she began to attract young women who wanted to follow her way of life. By the end of her life in 1997, Mother Teresa had received numerous awards from organizations and institutions around the world, including the Nobel Peace Prize in 1979, when she famously refused the traditional celebratory dinner, asking that the money for it be given to the poor instead. Her small band of followers grew and was formally recognized as a new order called the Missionaries of Charity, whose members are easily recognizable by their joyful attitude and their habit: the white sari with a blue striped border. Today, the Missionaries of Charity number more than 5,000 women in 139 countries. St. Teresa of Kolkata’s feast day is September 5. 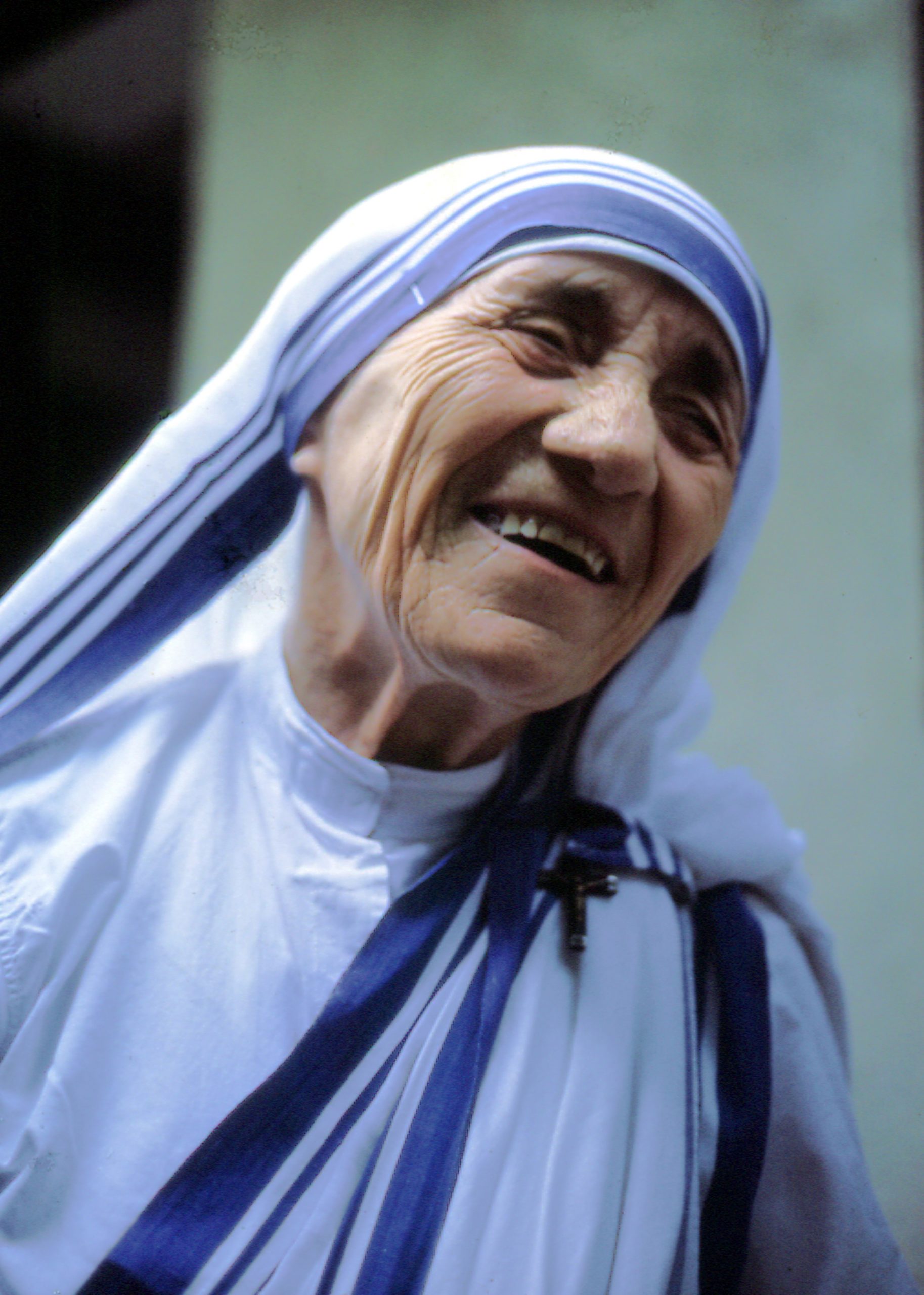