Taking up the challenge! 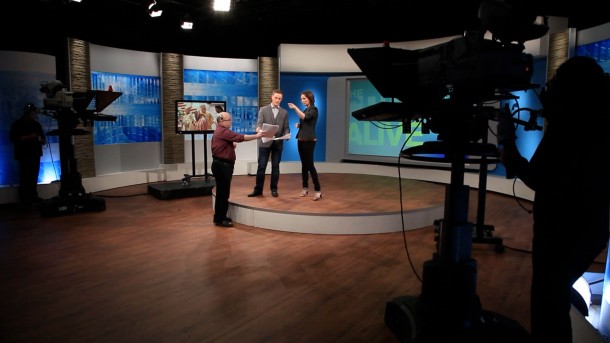 Salt and Light Producers Cheridan Sanders and Sebastian Gomes review the script of an episode of The Church Alive, a series dedicated to Vatican II and the New Evangelization.  The 13-part series, was filmed at the CBC studios in downtown Toronto. Pope Emeritus, Benedict XVI was the last Bishop of Rome to participate in the Second Vatican Council during the 1960's.  Fifty years after that historic event, the Catholic Church is undertaking a universal initiative called the "new evangelization."  In September, 2012, only five months before his resignation, Pope Benedict told a group of visiting bishops to the Vatican that the new evangelization "started precisely with the Second Vatican Council."  The two cannot be separated and any serious work of the new evangelization has to find its roots in the documents of Vatican II.  Salt and Light accepted this challenge produced The Church Alive, a series based on the themes of the council.  Episodes include: Catholic Education, Economics, Religious Liberty, the Media, and Ecology. This show is now available on DVD and is a great resource for teach for all who want to learn more about the Council.