A Day in the Life of a Synod Auditor 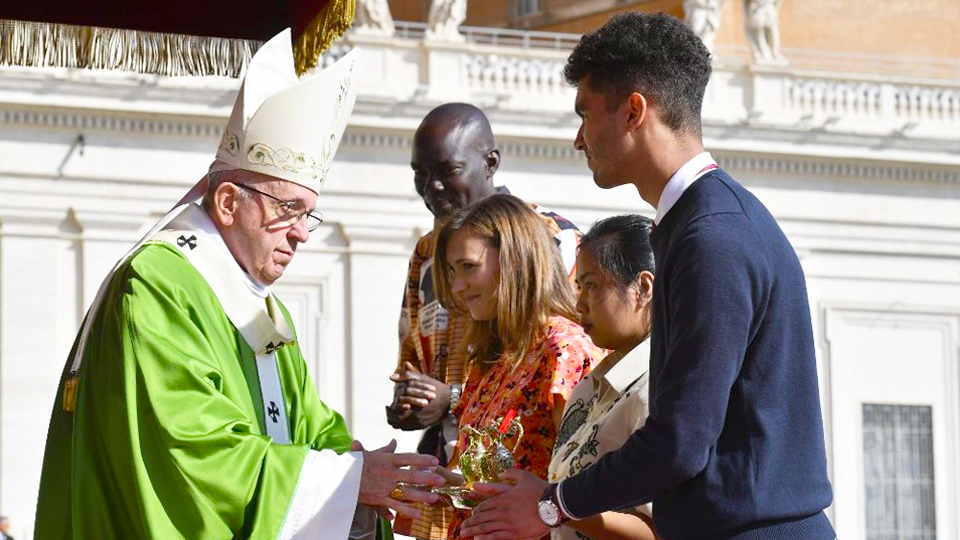 Young people present the gifts to Pope Francis at the opening Mass of the synod on Oct. 3. Emilie Callan is third from the right. (Photo courtesy of Vatican News)
The synod of bishops on “Young People, the Faith, and Vocational Discernment” officially opened with a Eucharistic Celebration in Saint Peter’s Square, presided over by the Holy Father, on October 3rd. Then it really got started in the afternoon with Pope Francis’ opening remarks to the nearly 400 delegates from all over the world gathered inside the synod hall. As an auditor, appointed by the Holy Father to participate in this synod, it is an incredible gift, privilege, and an honour, to be at the heart of such an event in the life of the Church. I recognized this even more when the pope said to each delegate, during his speech, “You are the voice of all young people who are not here.” That’s intense. Thanks, Holy Father. No pressure, right? Despite everything happening on the first day of the synod, I prayed to be present in each moment: carrying the gifts during the offertory procession at the opening Mass, having gelato at one of the best spots in Rome, being greeted by the pope himself before the opening session, meeting bishops I had only ever seen in photos, and feeling the tension and excitement inside the synod hall. All of that happened in less than 24 hours. It was only the beginning of a month-long journey, a journey which began a few months ago, when I received an email from the General Secretariat of the Synod of Bishops last June. 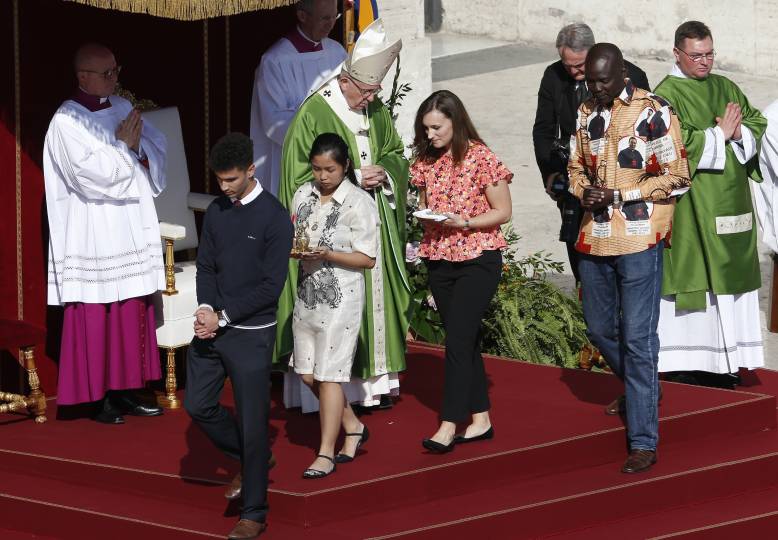 In that email, the Vatican was inviting me to participate in the 2018 Synod as an auditor. I first had to get over my initial shock at what I was reading – I was invited to attend the synod!? I must have read that email about a dozen times to make sure my French or English wasn’t suddenly faulty. I immediately Googled  “Auditor”, not because I didn’t know its definition but because I wanted to understand better what it meant in the context of a synod of bishops. Was I simply invited to listen to the bishops and, at the same time, digest insane amounts of pasta every day for three weeks, or did I have another role to play? The answer was both. As an auditor you’re expected to do some work. You also get to eat the pasta. The auditor is present inside the synod hall and, yes, listens to what is being said between the bishops and the pope. The auditor also has an opportunity to speak directly to the synod fathers. Each participant can prepare a four-minute intervention on a topic of their choice, usually inspired by the Instrumentum laboris. They also take part in the circuli minores, or small working groups, broken up into various languages. In the synod hall, which looks like an auditorium, the bishops have prime seats. They take up several rows which are closest to the pope, who is seated at the front, and the auditors sit in what I call the “nosebleed” section. During the synod on the family, in 2015, some of the auditors invited to participate were couples and families. They were from different parts of the world and experienced married and family life in very different ways: couples in mixed marriages, couples who had gone through tragedy, couples who experienced renewal in their vocation, couples raising large families. It was a direct witness for the bishops to the way the Church was already reaching out to families; it was also a witness for those families who were welcomed at the synod and were heard by the Church. That is what is happening again with young people. Thirty-four young people from every continent are participating as auditors. Some were at the pre-synod; others, I haven’t had the chance to meet yet. The Holy Father and the bishops expressed their joy at our presence in this synod. Hearing that and knowing that the synod fathers simply delighted in our being there was a comfort. From the moment Pope Francis called this synod of bishops, he has desired young people to be a part of the journey. For the first time, we are inside the walls of the Vatican for this great event. Once the process of “listening” is over, a process that will end on October 28 when the bishops submit their final report, the Holy Father will decide what to do with what he’s heard. Until then, we might not get a front row seat in the synod hall, but we are, in a way, in the front seat of an important moment in the life of the universal Church.

Watch our extensive coverage and analysis of the month-long Synod of Bishops on Salt and Light TV, now on free preview. Check your local TV provider for details. For more synod coverage visit: https://saltandlighttv.org/synod/