'Suggested' by a true story: The Rite reviewed

Yesterday I attended the pre-release media screening of the new exorcism movie The Rite. After reading the synopsis of the book it was based on, I went in with fairly high hopes, thinking that this might be a little more educational or insightful than past Hollywood takes on the subject. 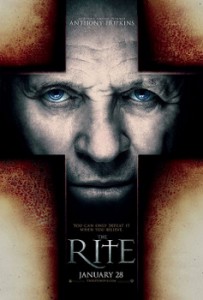 As I entered the theatre with my wife, we were greeted by studio interns who sat at a table with holy water bottles beside rubber lizards. Expectations lowered a little. When the movie started, the words “Suggested by the book: The Rite” came up. Not 'inspired by' or 'based on'…just the 'suggestion' of the book was how they would link this movie to the real-life account. My expectations of this being insightful were lowered again. We spent the next 90 minutes following Michael, a bright young seminarian who is ready to leave the seminary due to a lack of faith. After a talk (and financial threat) by his superior, he is sent to Rome to take a new exorcism course at the Vatican. In class he plays the role of the skeptic, seeking a psychological or medical answer for everything that is presented. Michael is then given a special assignment: outside of class, he must follow the day-to-day duties of a fairly unorthodox priest named Fr. Lucas (played by Anthony Hopkins). After continuing to choose not to believe in the devil and offering his own answers for each case, the evil eventually comes too close to ignore. After a slow and predictable build up, the climax follows the narrative of many boxing movies: the protagonist is on the ropes, but finds a late burst of strength—or in this case, faith. In the end I felt disappointed, from both a religious point of view and that of a movie-goer. However, a good point one can take from this movie is its reminder of the reality of evil in our world. And that just because we may choose to ignore it or not believe in it, that doesn’t mean it doesn’t exist.