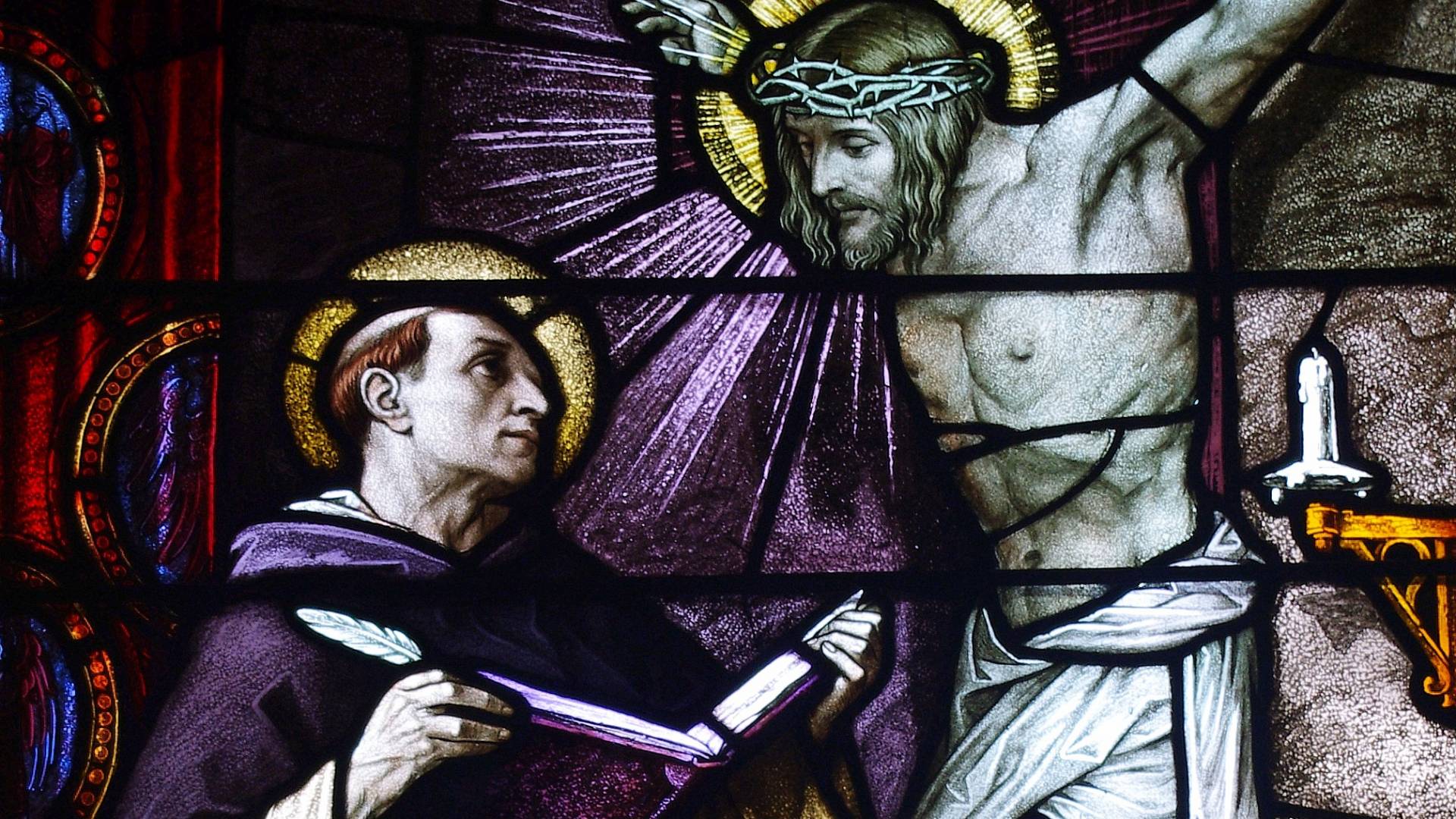 Detail of stained glass window in Saint Patrick Church in Columbus, Ohio, depicting St. Thomas Aquinas in conversation with the crucified Christ. Photo credit: Nheyob on Wikimedia Commons, cropped and used under the terms of license CC BY-SA 4.0
Among philosophers and theologians, St. Thomas Aquinas is generally an inspiring figure. A Doctor of the Church, he is best known for his Summa Theologica, a treatise considered monumental and arduous today but originally intended as a beginner's guide. Only considering this part of his work, the saint's patience, obedience, and wisdom are manifest. However, this medieval monk and scholar was a very colourful character whose life is worth describing in more detail. He is an excellent example of holiness because of his radical authenticity in his faith and his life in general.   Vocation of a rebel The account of his entry into religious life shows his independence of spirit and his authentic openness to the Holy Spirit. The young Thomas was sent to study with the Benedictine monks at the Abbey of Monte Cassino, and his parents, actively involved in Church politics, hoped that he would join the order and become the abbot of this monastery. But it was during this period that Thomas met the friars from the Order of Preachers, otherwise known as the Dominican Order, whose liveliness of faith attracted him. Founded by St. Dominic barely 10 years before the birth of St. Thomas Aquinas, the Order of Preachers participated in a wind of change in the Church. While many monasteries were losing contact with the outside world, the Dominicans went out to meet people and evangelize. In the 13th century, the Church was experiencing worldly and greedy political power dynamics. In short, quite the opposite of what the mission of the Church should be. In this context, this young saint-in-the-making felt a deep calling to enter a mendicant order with an innovative mission. His mother, opposed to this plan, kidnapped him and kept him locked up for a year. Finally, since he did not change his mind, she allowed him to enter the Dominican Order. Today we know how important this young man was going to be, not only for his order but for the whole Church. The effort of evangelization achieved by the Summa Theologica and the whole of his work is outstanding.   A scholar against the tide St. Thomas Aquinas was educated by St. Albert the Great and went on to teach in Italy and elsewhere in Europe. In doing so, he participated in a fascinating university tradition. First of all, Latin being the lingua franca, that is to say, the common language in the university and ecclesiastical circles of the time, he was able to teach in Paris as in Italy without any language barrier. However, this does not mean that there were no other obstacles in the intellectual context of the time. Between 1268 and 1272, St. Thomas Aquinas took part in a quarrel concerning Aristotle's place in Catholic university teachings as well as the opposition between secular and mendicant orders. Always on the side of innovation, the young scholar succeeded in reconciling Aristotelianism and the Catholic faith in his Summa Theologica and resisted attacks against the mendicant orders, of which the Order of Preachers is a part.   Visions of God: his prayer and mystical experience  A lesser known side of his work is his prayers in the form of poems inspired by his mystical experiences before the Blessed Sacrament. Among the best known writings of this nature are the hymns essential to the Liturgy of the Hours: "Pange Lingua", "Panis Angelicus", and "Lauda Sion". While we take them for granted today, these magnificent testimonies of faith show the highest sensitivity to the divine presence. At the end of his life, St. Thomas Aquinas even confided in his secretary and friend, a man named Reginald, how his mystical visions made him think of his written work:

"The end of my work has come; all that I have written and taught seems to me like a piece of straw compared to what I have seen and what has been revealed to me. From now on I hope from the goodness of my God that the end of my life will closely follow that of my works."

This statement can dishearten us because reading such a great saint treating the work of a lifetime in this way can discourage us in our own quest for holiness. However, his words express something magnificent: his relationship with God was so intimate that God gave him many heavenly visions. This only confirms the limitations of life on earth and amplifies the promise of the Kingdom of Heaven.   Our paths to holiness Saint Thomas Aquinas, who died at less than fifty years of age, had an exemplary journey, in large part because he remained faithful to himself in the most authentic way, that is, by being faithful to God's will. Holiness is, at its core, a radical expression of individuality and of openness to God's will. Throughout the history of the Church, we encounter saints who are all remarkable in their own ways, having very distinct personalities and journeys. This bodes well for humanity; as much as we can let ourselves be amazed by a saint like Thomas Aquinas, we must also remember that our path to holiness has to be fully discovered and freely consented to in order to be fully ours.