St. John Bosco and the Youth 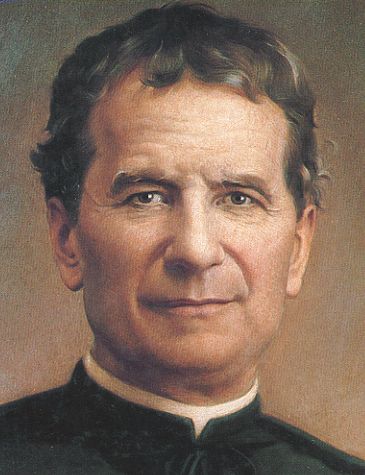 This past weekend, January 31st, was the fest of St. John Bosco, founder of the Salesian order of priests. I have a soft spot for Don Bosco, as he is commonly known. I grew up in a parish run by Scalabrinian fathers. The Scalabrinians were founded by Blessed John Baptist Scalabrini, who was close friends with Don Bosco and was inspired by him. The sisters in my home parish are Guanellian sisters, founded by Blessed Luigi Guanella, who worked with and studied under Don Bosco in Turin, Italy. I took my masters at the Salesian Pontifical University in Rome, run and staffed by Salesians who bring to their work (and play) everything Don Bosco believed in.
Don Bosco had a special place in his heart for young people, especially young people who were far from home or living on their own. He himself had left home at a young age and moved to Turin in order to go to school. He knew what it meant to have to fend for oneself in the big city. By the time Don Bosco was a priest the industrial revolution had swept northern Italy and people were coming to the cities in droves, looking for employment, including large numbers of young men (at the time, of course, a young man would have been what we consider to be a teenager, merely a child). He considered these boys his friends because of their shared experience. His openness towards these boys, his willingness to listen to them, his warm invitations to them to come to Mass, soon garnered Don Bosco a small but loyal group of followers. The young men would come to Mass on Sunday morning and then Don Bosco would take them on day trips, hikes in the mountains, picnics in the countryside, and give them a chance to be boys. This method of dealing with young people, as simple and common-sense as it may seem, are the cornerstones of what came to be known as the Preventative System of education. Give people love, acceptance, and direction, and you will prevent disaster.He realized what so few often realize about young, rambunctious, sometimes troublesome boys: they just need someone to give them something to do, a place where they feel they belong, and above all, love. The day trips would include a catechism session, plenty of play time, and end with a talk. Often these talks consisted of Don Bosco giving his boys some "homework" for the week ahead. He would even make the rounds of the factories where they worked, catching them on their breaks, to see how they were doing!Eventually there were so many young men being drawn to Don Bosco that a more formal approach was needed. Don Bosco started centres where these young men could come to spend time, learn how to read properly, learn a skill, and even just kick around a soccer ball with friends. The older boys who had been following Don Bosco longest were groomed to become mentors to the younger boys.Today there are Salesian "oratories" or youth centres all over Italy and wherever else the Salesians set up a mission. Working alongside the Salesian priests is an order of Salesian sisters, known as the Sisters of Mary Help of Christians. There are trade schools, grammar schools, and Universities operating under the Salesian umbrella.In honor of the patron saint of young people, some time in the next few days do as the Salesians at my University would do: gather together the young people you know, give them something fun to do, and spend some time just being together.