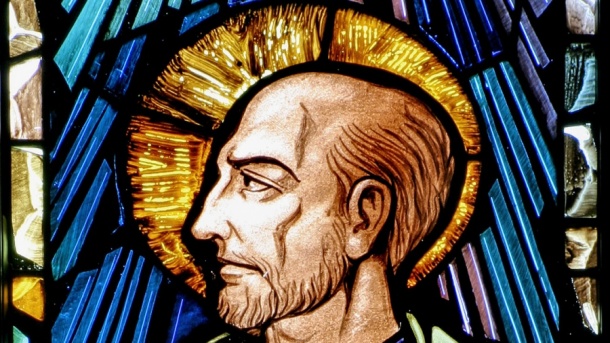 This post was submitted by Catherine Mulroney, the editor of  Living with Christ which is published by Novalis.

St. Jean de Brébeuf is a giant of Canadian history. His writings in the Jesuit Relations, for example, offer an invaluable window into life in 17th-century Canada, while his gift for languages, which prompted him to create the first Huron dictionary, earn him the label of Canada’s first ethnographer. Brébeuf’s impact on the Canadian experience looms large; he is credited with everything from coining the term lacrosse to penning the lyrics of The Huron Carol, a Canadian Christmas classic. One of the most telling details of his life, however, is found in the name the Huron people gave him — Echon. One translation means “healing tree,” a reference to Brébeuf’s height and gentle nature. The alternative translation, however, “one who carries a heavy burden,” speaks to the spiritual life of the most famous of the men known collectively as the Canadian Martyrs. Born in France in 1593, Brébeuf was ordained a Jesuit in 1622. He arrived in Quebec as a missionary in 1625, and in 1626 traveled to a Huron community near present-day Midland, Ont. Sent home during political upheaval, he returned to Quebec in 1633, making a 1,300-km canoe trek back to Huronia the following year, where he remained for most of the rest of his life. Brébeuf’s willingness to paddle long distances, portaging through rough terrain and enduring challenging conditions without complaint– even sleeping on rock, for example – so impressed the Huron he traveled with, that they called him Echon to reflect his abilities. Brébeuf’s embrace of his mission comes through clearly in his writings. His recollection of his journey, as described in the Relations, was that “I was at times so weary that my body could do no more. But at the same time my soul was filled with great happiness as I realized that I was suffering this for God.” The physical challenges and practical privations were only some of Brébeuf burdens during his mission. He was confronted with skepticism – if not downright mistrust – by many. The initial embrace of Christianity was slow, undoubtedly complicated by the fact that illnesses Europeans brought with them proved deadly to the aboriginal communities, killing thousands. Brébeuf remained unbowed, however, and as the number of those baptized gradually increased, he wrote instructions to future missionaries, telling them to love the Hurons as brothers and to be ready to offer such practical assistance as carrying magnifying glasses to start fires and to be respectful, eating food that is offered and helping with tasks. As the 1640s drew to a close, the Huron became increasingly threatened by the Iroquois, and on March 16, 1649, Brébeuf and fellow Jesuit Gabriel Lalemant were taken prisoner, tortured and martyred. Brébeuf’s stoicism impressed all who witnessed his suffering on behalf of his call. A missionary to his death, he addressed the Huron captured with him, telling them, ”God is the witness of our sufferings, and will soon be our exceeding great reward. Let us die in this faith…Sustain with courage the few remaining torments. They will end our lives. The glory which follows them will never have an end.” St. Jean de Brébeuf and seven companions were canonized in 1930. Secondary patron saints of Canada, their feast day is September 26. --- (CNS Photo)