St. Bernard of Clairvaux, Doctor of the Church, pray for us

Are you a beekeeper? A climber? A candlestick maker? Do you like Dijon mustard?
If you answered ‘yes’ to any of these questions, you may be interested to know that today the Church celebrates St. Bernard of Clairvaux . Among other things (as you saw), St. Bernard is renowned for his deep devotion to the Blessed Mother (he is credited with having penned the Memorare prayer) and for his commitment to the austerity of the Cistercian life. 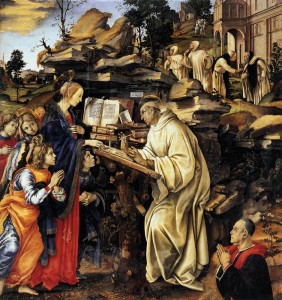 Born in 1090 at Fontaines near Dijon, France, St. Bernard was one of 7 children; 6 of which were boys. St Bernard’s family was ranked among Burgundy’s most affluent nobles. Having drank from the cup of wealth and affluence in high French society, Bernard understood that his thirst could not be quenched by the pursuit of earthly pleasures. After losing his mother when he was 19, St. Bernard resolved to enter the Cistercian monastery. His piety, quick wit and his spirit of recollection led him to be chosen among 13 other monks to found a new monastery in Clair Vallée which Bernard later called “Clairvaux”. Soon thereafter, Bernard was nominated abbot of the monastery. This nomination led him to be one of the most conspicuous figures of the 12th century. In the years to follow, Bernard’s name and Clairvaux became interchangeable as pilgrims came in droves to hear the abbot preach. The following is an excerpt from the homily In Praise of the Virgin Mother by St. Bernard (Hom. 4, 8-9: Opera omnia, Edit. Cisterc. 4 [1966], 53-54):

You have heard, O Virgin that you will conceive and bear a son; you have heard that it will not be by man but by the Holy Spirit. The angel awaits an answer; it is time for him to return to God who sent him. We too are waiting, O Lady, for your word of compassion; the sentence of condemnation weighs heavily upon us. The price of our salvation is offered to you. We shall be set free at once if you consent. In the eternal Word of God we all came to be, and behold, we die. In your brief response we are to be remade in order to be recalled to life. Tearful Adam with his sorrowing family begs this of you, O loving Virgin, in their exile from Paradise. Abraham begs it, David begs it. All the other holy patriarchs, your ancestors, ask it of you, as they dwell in the country of the shadow of death. This is what the whole earth waits for, prostrate at your feet. It is right in doing so, for on your word depends comfort for the wretched, ransom for the captive, freedom for the condemned, indeed, salvation for all the sons of Adam, the whole of your race. Answer quickly, O Virgin. Reply in haste to the angel, or rather through the angel to the Lord. Answer with a word, receive the Word of God. Speak your own word, conceive the divine Word. Breathe a passing word, embrace the eternal Word. Why do you delay, why are you afraid? Believe, give praise, and receive. Let humility be bold, let modesty be confident. This is no time for virginal simplicity to forget prudence. In this matter alone, O prudent Virgin, do not fear to be presumptuous. Though modest silence is pleasing, dutiful speech is now more necessary. Open your heart to faith, O blessed Virgin, your lips to praise, your womb to the Creator. See, the desired of all nations is at your door, knocking to enter. If he should pass by because of your delay, in sorrow you would begin to seek him afresh, the One whom your soul loves. Arise, hasten, open. Arise in faith, hasten in devotion, open in praise and thanksgiving. Behold the handmaid of the Lord, she says, be it done to me according to your word. [This excerpt is used in the Roman Office of Readings on December 20, in the fourth week of Advent, but it is also a great reading for the Solemnity (Feast) of the Annunciation of the Lord on March 25. Bernard dramatically celebrates Mary's Fiat, or statement of consent in response to the announcement by the archangel Gabriel, behold the handmaiden of the Lord; "let it me done to me according to your word."]

At the request of the Pope, Bernard was asked to mediate in the holy wars and so, in the name of obedience, he undertook many arduous journeys. Throughout his life, St. Bernard was held responsible for the founding of over 163 monasteries throughout France. At the time of his death however, this number expanded to 343. At this point, monasteries were bursting at the seams with vocations and it seemed that buildings were not going up quickly enough to house all of St. Bernard’s sons. Eventually, every one of his blood brothers and even his birth father entered the religious life leaving only his sister remaining in the world and she, with her husband’s permission, took the veil in the Benedictine Convent of Jully. St. Bernard of Clairvaux is a unique fusion of contemplative meets active. During his highly sought-after (yet rare) times of solitude in the silence of the cloister, St. Bernard produced a number of timeless spiritual works. These works led to his designation as "Doctor of the Church". One such testament to the timelessness of his writings is found in his compilation of sermons on the Song of Songs.