El Papa está en España!
Pope Benedict XVI's plane touched down at 6:30 am ET. He was greeted by members of the Spanish Royal Family, the Princes of Asturias, Prince Felipe and Princess Letizia. Many government officials and hundreds of locals came out to greet the Pope with great enthusiasm. 'Viva Papa!' was called out many times throughout the ceremony. 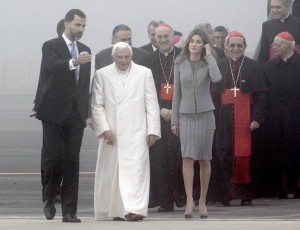 Prince Felipe gave the opening remarks welcoming the Holy Father. He thanked the Pope for his visit and highlighted the Holy Father's commitment to peace and freedom. Reflecting on the city of Santiago de Compostela,the Prince spoke about his own experience of walking the Camino pilgrimage last year. The Prince also remembered the profound impact that Pope John Paul II left on the country of Spain. Pope Benedict delivered his opening speech of the visit after Prince Felipe's welcome. In his speech, Pope Benedict referred to himself as pilgrim coming to Santiago. He also expressed his desire that his trip can help to rekindle faith in Spain and bring the people closer to their Christian faith. The spoke in both Spanish and Galician which is the language of the region of Galicia where the city of Santiago de Compostela is located. Read the full text from the Pope's address is below. 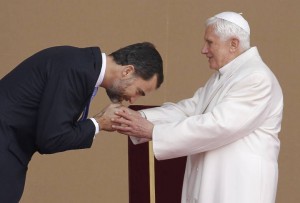 Welcome Ceremony Address of the Holy Father 6 November 2010 I thank Your Highness for the respectful words which you have addressed to me in the name of all, words which are a touching echo of the sentiments of affection for the Successor of Peter which mark the sons and daughters of these noble lands. I cordially greet those present and all who join us through the means of social communication, and I express my gratitude as well to all those who have worked generously, on the part of the Church and civil society, to make this brief yet intense Journey to Santiago de Compostela and Barcelona as fruitful as possible. In his deepest being, man is always on a journey, ever in search of truth. The Church shares this profound human desire and herself sets out, accompanying humanity in its yearning for complete fulfilment. At the same time, the Church pursues her own interior journey which, through faith, hope and love, leads her to become a transparent sign of Christ for the world. This is her mission and her path: to be among men and women an ever greater presence of Christ “whom God made our wisdom, our righteousness and sanctification and redemption” (1 Cor 1:30). For this reason, I too have journeyed here, to confirm my brothers and sisters in the faith (cf. Lk 22:32). I have come as a pilgrim in this Holy Year of Compostela and I bring in my heart the same love of Christ which led the Apostle Paul to embark upon his journeys, with a desire also to come to Spain (cf. Rom 15: 22-29). I wish to join the great host of men and women who down the centuries have come to Compostela from every corner of this peninsula, from throughout Europe and indeed the whole world, in order to kneel at the feet of Saint James and be transformed by the witness of his faith. They, at every step and filled with hope, created a pathway of culture, prayer, mercy and conversion, which took shape in churches and hospitals, in inns, bridges and monasteries. In this way, Spain and Europe developed a spiritual physiognomy marked indelibly by the Gospel. Precisely as a herald and witness of the Gospel, I am also going to Barcelona, in order to nourish the faith of its welcoming and dynamic people. A faith sown already at the dawn of Christianity, one which blossomed and grew in the warmth of countless examples of holiness, giving rise to countless institutions of beneficence, culture and education. A faith which inspired the gifted architect Antoni Gaudí to undertake in that city, with the fervour and cooperation of many people, that marvel which is the church of the Sagrada Familia. It will fall happily to me to dedicate that church, which reflects all the grandeur of the human spirit in its openness to God. I am very pleased to be once again in Spain, which has given the world a constellation of great saints, founders and poets, like Ignatius of Loyola, Teresa of Jesus, John of the Cross, Francis Xavier, among many others; in the twentieth century it raised up new institutions, groups and communities of Christian life and apostolic activity and, in recent decades, it has advanced in harmony and unity, in freedom and peace, looking to the future with hope and responsibility. Moved by her rich patrimony of human and spiritual values, she seeks likewise to progress amid difficulties and to offer her solidarity to the international community. These contributions and initiatives which have distinguished your long past, as well as the present, together with the significance of the two beautiful places I will visit on this occasion, lead me to look also to all the peoples of Spain and Europe. Like the Servant of God John Paul II, who from Compostela exhorted the old Continent to give a new impulse to its Christian roots, I too wish to encourage Spain and Europe to build their present and to project their future on the basis of the authentic truth about man, on the basis of the freedom which respects this truth and never harms it, and on the basis of justice for all, beginning with the poorest and the most defenceless. A Spain and a Europe concerned not only with people’s material needs but also with their moral and social, spiritual and religious needs, since all these are genuine requirements of our common humanity and only in this way can work be done effectively, integrally and fruitfully for man’s good. [In Galician:] Dear friends, I renew my thanks for your kind welcome and for your presence at this airport. I renew my affection and closeness to the beloved sons and daughters of Galicia, Catalonia and the other peoples of Spain. In commending my stay among you to the intercession of the Apostle Saint James, I ask God to bestow his blessings on all of you. Thank you very much.