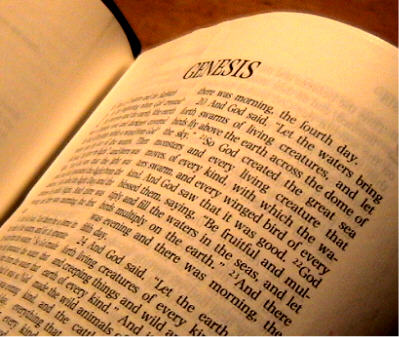 The Bible has been surrounded by such an air of reverence and holiness that for many it seems odd to think of reading the Bible as one might read the latest New York Times list best-seller. In some traditions it is actually seen as irreverent to do so. Thus we have come to rely on other people teaching us about the Bible and perhaps guiding us through reading select passages from the Bible. If the Bible is THE how-to guide for our religion, and the resource guide for our faith, why on earth wouldn't we actually pick it up and read it?
I came across an article in the Toronto Star a couple of weekends back about a "non-observant" Jewish man who did just that. It started by chance; he was at a synagogue for a bat-mitzvah, was bored to tears, and picked up the Torah and started reading. He opened up to Genesis and read the first story he found. It was the story of Dinah being raped. Her rapist decided he wanted to marry her, asked permission of her brothers, who agree on the condition that the groom-to-be and his brothers and father, all get circumcised. They do. Dinah's brothers return the favour by invading the would-be-groom's town, killing all the freshly circumcised men and taking all the women and children as slaves. The only explanation they offer is "should let our sister be treated like a prostitute?"David Plotz, a writer for Slate.com and "non-observant" Jew, said he didn't remember hearing this story in his years at Hebrew school, or in his teen years at a Christian High School. Gripped by the story of Dinah he decided it was time to pick up the Bible and see what other stories were being overlooked. So Plotz read the Bible cover to cover. The result is a book called Good Book: The bizarre, hilarious, disturbing, marvelous, and inspiring things I learned when I read every single word of the Bible. He discovers, among other things, that the people of the Bible, these people who have been immortalized and who's stories we turn to for inspiration and guidance, were human. They were complex people with areas of light and darkness in them, and despite their flaws and sins, God showed mercy on them and sometimes even declared them favoured. Huh.I'm always struck by stories like this, of people who have forgotten the importance of their faith, who have come to see it as irrelevant, and yet are struck by wonder and awe at some of the most basic elements of that faith... elements to which the rest of us have grown blind. I remember hearing about a Muslim student taking courses in Inter-Religious Dialogue at Rome's Pontifical Gregorian University. While the Christians in the class walked away from the lecture on the Gospels unaffected, the Muslim girl was gripped by curiosity and went home to read the rest of Mark's Gospel just to find out "what happens to Jesus?" The Christian students were bowled over that someone a) didn't already know what happens to Jesus, and b) would read the Gospel like Tom Clancy's latest thriller.I realize it would be a slow, slow process, but can you imagine what might happen in this world if everyone, at some point, picked up a Bible, put aside everything they thought they knew about the Bible, and just read it? I dare you!