S+L in Rome: Meeting the Pope

I met the Pope on Friday. 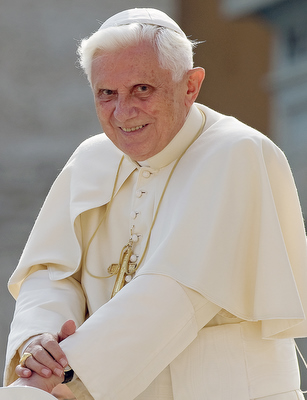 The president of Guatemala was in Italy and, as per protocol, he also stopped by the Vatican to see Benedict XVI. Because I speak Spanish and Italian, I was included in the press pool that was allowed into the San Damaso Library for the visit. The pool of journalists and photographers waited in the Throne Room just outside the library to watch the official greeting. The Pope floated out of his library, extended both arms to President Alvaro Colom Caballeros and said "Bienvenido". They then proceeded into the library. The media followed, and watched as the Holy Father and the Guatemalan President took their seats at the papal desk. Between the noise of the camera shutters and the shuffle of the photographers' feet, we journalists heard nothing. We were all then ushered outside while the Pope and the president had a short chat. The journalist from Spain's EFFE news agency turned to me and asked, "Did you get anything?". I shook my head. "Nada." The President of Guatemala is a soft spoken man -- much to our dismay -- as is the Holy Father. In the end, the lone thing we understood was the Pope's final question at the end of the meeting, and this only because the interpreter had a robust voice. The pontiff asked where the president's wife was. He informed His Holiness that Mrs. Colom Caballeros had already departed for Guatemala. Pope Benedict responded, "I send my greetings to your wife, too". With that the president left, preceded by the members of the papal household and escorted by a Swiss Guards in full regalia. Then the handful of journalists in the library were introduced to the Holy Father, one at a time. It was very brief, as we're not allowed to ask questions (not even about the red shoes!) Two things struck me at today's meeting: The Swiss Guards: as funny as their uniforms might look, they are rather intimidating. If a group of hand-picked, elite, armed soldiers (yes, I realize the weapon is ancient, but it's still a weapon) comes marching toward you, their steps resounding over the cobblestones in a series of perfectly unified "pooms", and the whole troop showing no signs of letting anything stop them...what would you do? I subtly hid behind the press office official escorting the journalists to the library. The other thing that struck me was the Holy Father himself. He's so serene! He smiles all the time, and it's a genuine, full, happy smile. In fact, we all commented afterward that he looks very well, both for his age, and given the current international media frenzy. Now that I know the Holy Father is holding up well, I can put together my stories for this week. Ciao for now. - CNS photo/Alessia Giuliani, Catholic Press Photo