S+L in Rome: Juventus and the Archbishop of Ottawa... in Turin

Monday, April 26th, I was dispatched to Turin, Italy to do some preview work for our coverage of Holy Father's upcoming trip, and to write an article or two for Catholic News Service. 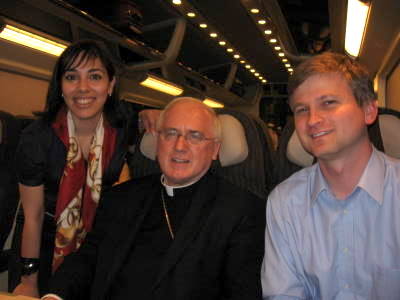 Let's skip the part about missing the train by two seconds, and fast forward to when I actually got to Turin. It is a beautiful little renaissance city at the foothills of the Alps, surrounded by mountains that was once home to the Savoy dynasty. On Tuesday morning, I proceeded to the Press Office for the Shroud exhibit, got my press pass and set up my laptop to check e-mail and look up a couple of phone numbers. On the desk next to me I set down my Turin travel guide. One of the local journalists sat down close by and said, "I guess you're not from here if you've got that book with you." I gave my large, "Pleased to meet you" grin and said, "No, I'm from Canada" "Ah, Canada. So you're here for the Archbishop of Ottawa?" I blinked, "What?" "The Archbishop of Ottawa is visiting the Shroud at 2:15," the Torinese journalist said. I walked over to the whiteboard by the door that listed the VIPs visiting the Shroud that day and sure enough, right under the line that read, "Gioccatori Juventus" (Juventus players) was a line that read: "2:15 Arch. Prendergast, Ottawa (Canada) " I made a few inquiries and was told to be in front of the Cathedral at 2:15. The press office officials would bring the Archbishop to us after his visit so we could interview him. I had lunch, (a local journalist led me to his trusted neighbourhood food and drink place and entrusted me to the culinary care of the establishment's owner). I finished writing my article for CNS based on an interview done the night before, and made my way to the Cathedral. I walked up to an official from the press office and asked, "Is Archbishop Prendergast here yet?" The Italian official looked concerned. "No. They were supposed to call me when he arrives to let us know if he'd like to do the full exhibit course or the short route, but nobody has called." So I stood and waited with my cameraman and a couple of other Italian journalists. Five minutes went by, then ten. The press office official called the protocol office and was told nobody had heard from or seen the Archbishop. Looking concerned the press office gentleman asked me, "Do you know what he looks like?" "Yes I do," I answered. "Come with me, we're going to go look for him," he said. I was lead through the Shroud exhibit in reverse direction, keeping my eyes peeled for Archbishop Prendergast. Nothing. All of Novara had invaded the exhibit, but there was no sign of the Archbishop. At the entrance to the exhibit we got a phone call. One of people from the protocol department found Archbishop Prendergast and promptly led him to a quiet piazza for our interview. When I got to the piazza, the Archbishop was in the middle of a scrum of Italian journalists asking him a slew of questions and he was doing quite well keeping up with them. Once the Italians had their story, including the photo of the Archbishop signing a petition of solidarity with the Holy Father started by a Turin newspaper, I said in English, "Archbishop Prendergast, I'm from Salt + Light Television." "AH!! Yes the Rome correspondent. I've read the S+L blog. I knew you were here!" Which made me feel guilty for not following Archbishop Prendergast's blog more regularly myself. If the archbishop can follow my blog, I can certainly find time to follow his. He graciously granted me an interview for Perspectives, and reminded me that Turin is not only home to the Holy Shroud but also Pier Giorgio Frassati's final resting place. In fact, I had passed in front of the chapel that houses his remains on my way up to see the Shroud. We wrapped up the interview and said goodbye, with Archbishop Prendergast mentioning he was leaving that afternoon on the Frecciarossa (high speed) train. "Me too!" I said. It turned out were going to be on the same train. My CNS colleague blurted out "Hey, come visit us. We're in car seven!" Low and behold somewhere around the stop for Florence, as my CNS colleagues and I were chatting away, Archbishop Prendergast came to visit, announcing, "Gee, it's purgatory back there in our car... the air conditioning isn't working!" We all groaned knowingly. Failed air conditioning is an ailment common to Italian trains, even the newest ones. So Archbishop Prendergast and Msgr. Jose Betancourt, formerly of Ottawa, now of the Vatican Secretariat of State, came to join us in our nice, climate controlled train car. It made for pleasant ride from Florence to Rome's Termini station. The next day in the office the CNS photographer who had been on the trip to Turin, commented, "Wow. He's amazing! I wish he'd come to sit with us earlier!" Canadian clergy, wowing the world, one train ride at at time.