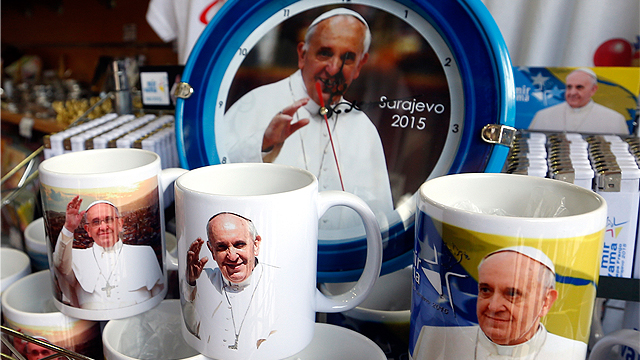 I am particularly curious about Pope Francis' next trip to Sarajevo, which he will embark on in a few hours. I'm interested in the arrival of the pontiff to a place that is so different and seeped in history and drama, a city stained with pain. It caused the Balkan war in the 90's.
Just last summer, I was walking by Obala Kulina Bana, the long boulevard that bisects the city, between mirrored tower blocks with the most famous brands that shone with the flow of what is now globalization. Sarajevo appeared as a new capital, moved to the West, modern and dynamic. Yet, you know that all the novelty that is in the air and the future is the consequence of the disaster. Think about how the buildings that are in this state are like this because most of them have been totally rebuilt. Today, they are less than twenty years old. Many, less than ten.
The soul of the city can’t be understood with a trip, but the spirit of a place can quickly be recognized and so it's hard not to feel what Sarajevo is in its essence: divided, conflicted, torn but with a look that is always pointing to the future.
Maybe you can’t see the holes on the walls of the buildings, the tangible signs of conflict, that are much more common in Mostar, around Drage Palavstre, near the famous bridge symbolic of the war.
Pope Francis will arrive in Bosnia and will be greeted by tens of thousands of Catholics, many of them of who will arrive from nearby areas. But the Kosevo Stadium, which has a capacity of 70,000 people, is ready to embrace the Pope who, leading up to his visit, spoke to the Bosnian people through a personal video message talking about how he is preparing for his trip.
"I assure you all of my affection and my strong spiritual closeness. I encourage Catholics to be witnesses to their fellow citizens of the faith and love of God, working for a society that makes ways towards peace in brotherhood and in mutual cooperation." These are the words the Holy Father spoke on Tuesday, statements that echo those of the Archbishop of Sarajevo, Cardinal Vinko Puljic, who a few weeks ago had said that the Pope's visit was an encouragement in peace building and that would bring positive energy, security and confidence in themselves and in their neighbors in order to do something positive together.
The Catholic Church in Bosnia and Herzegovina has about 440,000 faithful, about 3,833,000 inhabitants (as of 2013), 304 parishes, 280 secular priests, 358 religious (of which 344 priests) and 537 religious.
In recent years there has been a process of Islamization of the territory, a phenomenon confirmed by Msgr. Pero Sudar, Auxiliary Bishop of Sarajevo. The figures speak for themselves and show that Catholics have fallen sharply: from 850,000 before the war of 1991-95, to the current 439,000.
Going into detail and talking only of Sarajevo, the numbers tell us that today, Catholics are only 17,000 of 600,000, or 4% of the population, as compared to 15% before the conflict.
This is the situation in Bosnia and its capital, a place that has no similarities with other European countries. Even the ever peaceful Belfast is divided and tough, but it has never had to experience the drama of a long bloody war, with far too many families destroyed.
Pope Francis is ready to land in Bosnia, the focal point of a part of Europe that is unique and difficult to fully explain, a crossroads of ethnicities, cultures and religions that mirror very few across the road.
Watch S+L's LIVE coverage of Pope Francis trip to Sarajevo!