The theme song for World Youth Day 2000, held in Rome began with the lines, "from many roads we come to Rome, following the footsteps of faith." Today, St. Peter's is again a meeting point for the youth of world, this time to celebrate the man who taught them that they have an indispensable place at the heart of the Church. That celebration began Saturday evening and carried on through the night. Granted, the party was slightly different than most. 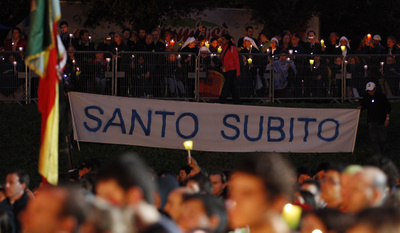 At midnight Rome time the streets of Rome were full, flags of all colours waved under the Roman night sky. Despite a 26 hour voyage by bus and boat, Spanish pilgrims paraded along singing "Esto es la juventud del papa" or "This is the Pope's youth" and "Juan Pablo segundo, te quiere todo el mundo" (John Paul two, the whole world loves you") Member of the Neocatecumenal way danced their way down the street. Instead of pub crawling, these youth were Church Hopping, stopping at the eight churches officially hosting all night Eucharistic adoration - something JPII was known to do frequently. At San Giovanni dei Fiorentini the movement "Nuovi Orizonti" a movement that works with at-risk youth hosted all night adoration encouraging young people to light a candle and place it at the foot of the altar where the Eucharist was being exposed. The parish choir provided meditative music in various language....which helped those who wanted to spend the night in adoration and helped those who were camping out in the church. Outside camera crews interviewed anyone they could find to ask "why spend the night praying?" or "what's your favourite memory of John Paul II?" Sitting on the steps of San Giovanni dei Fiorentini even veteran Vaticanists had to admit to each other, "this is amazing. I've never seen anything like it." At 3:30 am when I made my way to St. Peter's square to line up at the Journalist's entrance the streets surrounding the Vatican Borgo were impermeable, the pilgrims who had been praying at the vigil and in the all night vigil churches were now camping out on the Lungotevere. Some still singing and dancing, some praying, some sleeping, some sitting sharing their favourite memories of John Paul II. - CNS Photo/Paul Haring