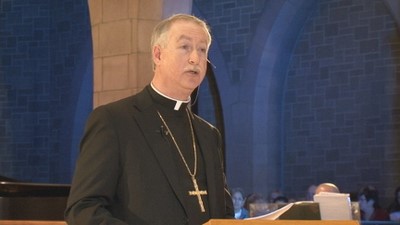 Salt + Light will be in Edmonton tonight filming the first episode of the second season of Nothing More Beautiful.
Many of our viewers will recall that Nothing More Beautiful is a series of catechesis and witness talks given in the Archdiocese of Edmonton with the goal of deepening the faithful's relationship with Christ. The name of the initiative is based on a quote from Pope Benedict:

In the first season, which will soon be available on DVD at our webstore, four episodes looked at different aspects of the theme the Beauty of the Human Person, Created by God and Saved in Jesus Christ. This second season, made up of five encounters, will focus on Encountering Anew the Beauty of Christ and will feature speakers from across Canada and the United States including Vancouver's Archbishop Michael Miller, Houston's Cardinal Daniel DiNardo, the Superior General of the Sisters of Life Mother Agnes Mary Donovan, Supreme Knight Carl Anderson, and well known Pope John Paul II biographer George Weigel. Tonight's encounter includes the chief shepherd of Edmonton, Archbishop Richard Smith. He'll be providing the catechesis, while Lydia Cristini, a teacher and youth minister, will provide the witness talk. The two will speak of Jesus Christ: Word of God Made Flesh. The first episode of this season will air Saturday, November 7th at 9pm ET, with an encore presentation Tuesday, November 10th at 8pm ET. For more information on Nothing More Beautiful, visit the Archdiocese of Edmonton's official page HERE.