Sainthood has no age requirement 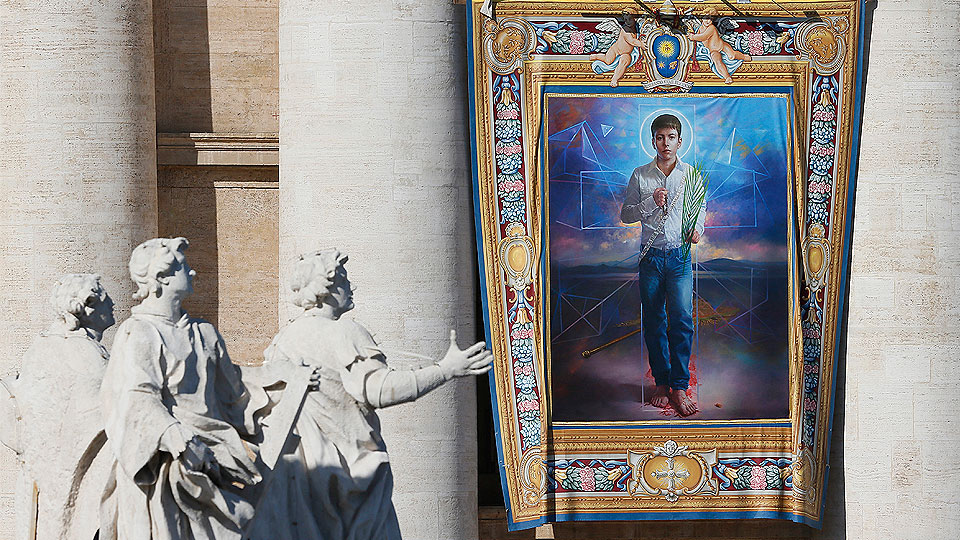 CNS photo/Paul Haring
After announcing 13 new cardinals two weeks ago, the Pope presided over the canonization mass of seven blessed on Sunday, October 16, 2016, in front of 80,000 people, who filled St. Peter’s Square for the occasion. Speaking of the new saints, during his homily, the pontiff said the saints are men and women who enter fully into the mystery of prayer. They are people who struggle with prayer, let the Holy Spirit pray and struggle in them.
Seven new saints from all over the world, each with unique stories to tell, lived at different times but are all united in service to God, in the name of their faith.
First, there is Argentine priest José Gabriel Brochero. This priest rode his mule out into the slums, a concept stressed so many times by Pope Francis.
From the period of the anti-Catholic persecution during the French Revolution, the story of the Lasallian Solomon Leclercq stands out as one who was dedicated to teaching, yet killed in 1792.
Two Italians were canonized: Father Alfonso Maria Fusco and Father Ludovico Pavoni. Father Alfonso lived in the nineteenth century and devoted himself to teaching poor children, while Father Ludovico was also committed to serving marginalized young people as well as the less fortunate.
And among the new saints, we find a different story - that of José Sánchez del Río. He became a martyr, at the age of 14, during the anti-Catholic Revolution in Mexico known as the Cristero wars. He joined the rebel forces to fight the oppressive regime in the country and refused to deny his faith.
“A life marked by a great love for the Eucharist” was the trademark of Spanish Bishop Manuel Gonzalez Garcia, who lived in the years of the Spanish Civil War.
Finally, a woman was also canonized, a French nun - Discalced Carmelite - who died at the age of 26 from a terrible disease. Her name is Elizabeth of the Holy Trinity.
Each one of these saints led different lives but had one thing in common: a deep love for Christ and the Church combined with a commitment to uphold each person’s dignity.

For more on the recent canonizations, catch Vatican Connections Fridays at 8 pm ET!