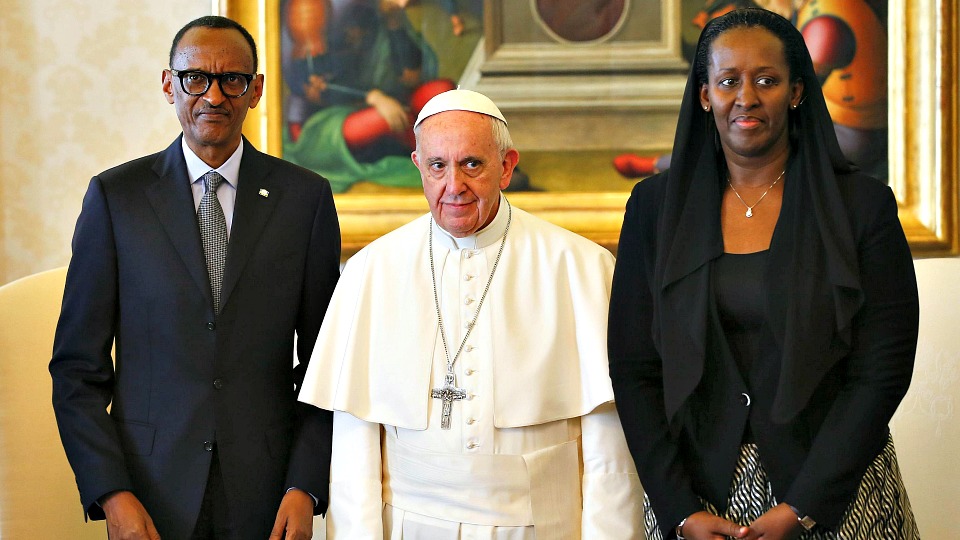 CNS photo/Tony Gentile, pool via EPA
Last Monday, Pope Francis met with the President of Rwanda Paul Kagame. A statement released from the Holy See Press Office after the meeting said Pope Francis asked God's forgiveness for the failures of the Catholic Church during the 1994 Rwanda genocide and for the hatred and violence perpetrated by some priests and religious. In fact, 23 years ago during the one hundred day genocide, more than eight hundred thousand ethnic Tutsis and moderate Hutus were killed by Hutu extremists. Many of the victims died at the hands of priests, clergymen and nuns, according to some accounts by survivors, and the Rwandan government says many died in the churches where they had sought refuge. In light of the recent Holy Year of Mercy and of the Statement published by the Rwandan Bishops at its conclusion, the pontiff also expressed the desire that this humble recognition of the failings of that period may contribute to a “purification of memory.” At the same time, it may promote, in hope and renewed trust, a future of peace, witnessing to the concrete possibility of living and working together once the dignity of the human person and the common good are put at the centre. For a long period the Rwandan government had pressured the Church to apologize for its collaboration in the genocide but the Vatican and the local Church have always been hesitant to do so, saying that those Church officials who had committed crimes had acted individually. Also, in 1996, John Paul II refused to take blame on the Church’s part for what transpired in Rwanda. He wrote a letter to Rwandan bishops saying clearly: “The Church in itself cannot be held responsible for the misdeeds of its members who have acted against evangelical law.” In President Kagame's 25-minute private meeting with Pope Francis, as well as during his meeting with Cardinal Pietro Parolin, the Vatican Secretary of State, there was an exchange of views about the political, social and regional situation, with attention to those places that are suffering conflicts and natural hardships. A particular concern was expressed for the large number of refugees and migrants in need of help and support from the international community and from regional structures. For more on Pope Francis' visit with the Rwandan President, watch Vatican Connections every Friday at 8 pm EST!