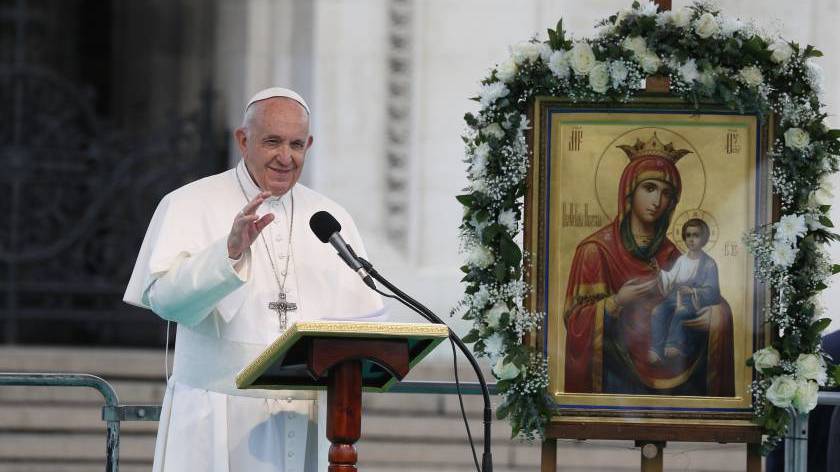 Pope Francis greets the crowd as he leads the "Regina Coeli" prayer in Alexander Nevsky Square in Sofia, Bulgaria, May 5, 2019. (CNS photo/Paul Haring)
Dear Brothers and Sisters, Christ is risen! With these words, Christians – Orthodox and Catholic – here in Bulgaria have from ancient times greeted one another in the Easter season: Christos vozkrese! These words express great joy for the triumph of Jesus Christ over evil, over death. They are an affirmation and a testimony of the very heart of our faith: Christ is alive! He is our hope, and in a wonderful way he brings youth to our world. Everything he touches becomes young, new, full of life. The very first words, then, that I would like to say to each of you are these: Christ is alive, and he wants you to be alive! He is in you, he is with you and he never abandons you. He walks with you. However far you may wander, he is always there, the Risen One. He continually calls you, he waits for you to return to him and start over again. He is never afraid to start over again: he always gives us his hand for us to begin again, to get up and start over again. When you feel you are growing old out of sorrow, – sadness ages us – resentment or fear, doubt or failure, he will always be there to restore your strength and your hope (cf. Christus Vivit, 1-2). He lives, he wants you to live and he walks with you. This faith in Christ, risen from the dead, has been proclaimed for two thousand years in every part of the world, thanks to the generous missionary effort of so many believers, called to give themselves completely and selflessly to the spread of the Gospel. In the history of the Church, also here in Bulgaria, there have been many pastors outstanding for the holiness of their lives. Among them, I readily recall my predecessor, whom you call “the Bulgarian saint”, Pope John XXIII, a holy pastor whose memory is particularly honoured in this land, where he lived from 1925 to 1934. Here he learned to esteem the traditions of the Eastern Church and built friendly relationships with the other religious confessions. His diplomatic and pastoral experience in Bulgaria left so deep a mark on his pastor’s heart that he was led to promote in the Church the prospect of ecumenical dialogue, which received a notable impulse in the Second Vatican Council, which he himself wished to convene. In a certain sense, we can thank this land for the sage and inspired intuition of “good Pope John”. In pursuing this ecumenical journey, I will shortly have the joy of greeting the representatives of various religious confessions of Bulgaria, which, while an Orthodox country, is a crossroads where various religious expressions encounter one another and engage in dialogue. The very welcome presence in this meeting of representatives of these different communities is a sign of the desire of all to pursue the increasingly necessary journey towards “the culture of dialogue as a path; mutual cooperation as the code of conduct; reciprocal understanding as the method and standard” (Document on Human Fraternity, Abu Dhabi, 4 February 2019). We find ourselves near the ancient church of Saint Sofia, and next to the Patriarchal Church of Saint Aleksander Nevsky, where just now I prayed in memory of Saints Cyril and Methodius, the evangelizers of the Slavic peoples. As evidence of my esteem and affection for this venerable Orthodox Church of Bulgaria, I have had the joy of greeting and embracing my brother, His Holiness Patriarch Neofit and the Metropolitans of the Holy Synod. Let us now turn to the Blessed Virgin Mary, Queen of heaven and earth, asking her to intercede before the Risen Lord, that he may grant this beloved land the necessary impulse always to be a land of encounter. A land in which, transcending all cultural religious and ethnic differences, you can continue to acknowledge and esteem each other as children of the one heavenly Father. We make our plea with the song of the ancient prayer, Regina Caeli. We make that prayer here, in Sofia, before the icon of Our Lady of Nessebar, whose name means “Gate of Heaven”, so dear to my predecessor Saint John XXIII, who began to venerate her here in Bulgaria, and carried her with him to the day of his death.