There has been a tremendous outpouring of love for Saint André of Montreal over the last few weeks. 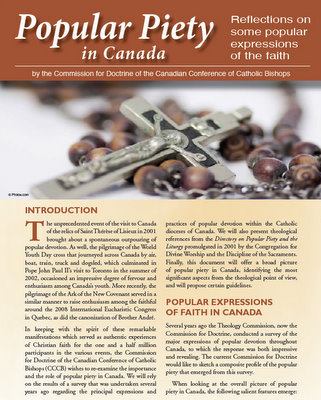 That shouldn't be  too much of a surprise -- at least in light of a recently released document on Popular Piety in Canada. The document was released on the first day of the Canadian Conference of Catholic Bishop's plenary assembly, in Cornwall, Ontario.   It is made up of findings from a survey of dioceses in Canada from several years ago. The survey found that many Canadian Catholics' devotions are centred around home grown saints -- that is the Saints and Blesseds of the Church in Canada. It also found that Eucharistic Adoration is central among devotions for the Canadian faithful. And two of the most popular and fervent expressions of faith in our country are for the Blessed Virgin Mary and St. Anne! The document also suggested an increased emphasis on Sacred Scripture, the Trinity, the Holy Spirit, Christ’s Resurrection, the full and conscious participation in the Eucharist, and prayers for the dead. See the document below:

Popular Piety in Canada: Reflections on some popular expressions of the faith by the Commission for Doctrine of the Canadian Conference of Catholic Bishops The unprecedented event of the visit to Canada of the relics of Saint Thérèse of Lisieux in 2001 brought about a spontaneous outpouring of popular devotion. As well, the pilgrimage of the World Youth Day cross that journeyed across Canada by air, boat, train, truck and dogsled, which culminated in Pope John Paul II’s visit to Toronto in the summer of 2002, occasioned an impressive degree of fervour and enthusiasm among Canada’s youth. More recently, the pilgrimage of the Ark of the New Covenant served in a similar manner to raise enthusiasm among the faithful around the 2008 International Eucharistic Congress in Quebec, as did the canonization of Brother André. Continue reading