Pope in UK: Religion is a guarantee of authentic liberty and respect, says Pope in Glasgow homily

An estimated 80,000 people gathered in Bellahouston Park for Mass with Pope Benedict XVI today. In the lead up to Mass, the faithful were treated to a musical presentation . It was truly a festival of faith; the Sydney World Youth Day theme song was part of the repertoire, and Susan Boyle sang a moving rendition of "How Great Thou Art." The faithful had been gathering in Bellahouston Park since early in the morning, despite the fact that Mass did not begin until 5:30pm local time. Pope Benedict did not disappoint. 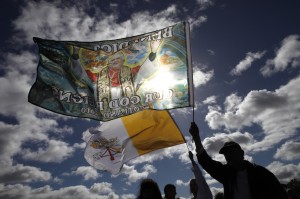 In his homily, Pope Benedict continued calling Britons and Scots to follow Christ faithfully and to be a light for others. The Gospel reading was the account of Jesus sending the disciples out to proclaim the Good News. The Holy Father reflected on this in his homily, but not before taking a moment to remember John Paul II's visit to Glasgow saying,

"It is with some emotion that I address you, not far from the spot where my beloved predecessor Pope John Paul II celebrated Mass nearly thirty years ago with you and was welcomed by the largest crowd ever gathered in Scottish history. Much has happened in Scotland and in the Church in this country since that historic visit. I note with great satisfaction how Pope John Paul’s call to you to walk hand in hand with your fellow Christians has led to greater trust and friendship with the members of the Church of Scotland, the Scottish Episcopal Church and others."

He also pointed out that this year is the 100th anniversary of the World Missionary Conference in Scotland, which is widely considered the birth of the modern ecumenical movement. The link between faith, reason and education is one of the central themes of this voyage due to Cardinal Newman's beatification. To that end, the pope pointed out that education is one of the things required to build up the church and pass on the faith. Scotland has three universities founded in the middle ages by Popes. Among them, St. Andrews University which is marking it's 600th anniversary. Pope Benedict told the gathered faithful an "evangelization of culture" is needed because the world today is faced with a "dictatorship of relativism" which threatens to hide the truth about the nature of humans. He added,

"There are some who now seek to exclude religious belief from public discourse, to privatize it or even to paint it as a threat to equality and liberty. Yet religion is in fact a guarantee of authentic liberty and respect, leading us to look upon every person as a brother or sister. For this reason I appeal in particular to you, the lay faithful, in accordance with your baptismal calling and mission, not only to be examples of faith in public, but also to put the case for the promotion of faith’s wisdom and vision in the public forum. Society today needs clear voices which propose our right to live, not in a jungle of self-destructive and arbitrary freedoms, but in a society which works for the true welfare of its citizens and offers them guidance and protection in the face of their weakness and fragility. Do not be afraid to take up this service to your brothers and sisters, and to the future of your beloved nation."

The Holy Father then turned his attention to the clergy of Scotland. He told the Bishops of Scotland that their first duty is to the priests of Scotland and their sanctification. In turn he told the priests that they are called to serve God's people by modeling their lives on the mystery of the Cross.

"Preach the Gospel with a pure heart and a clear conscience. Dedicate yourselves to God alone and you will become shining examples to young men of a holy, simple and joyful life: they, in their turn, will surely wish to join you in your single-minded service of God’s people. "

There were some direct words for the youth of Scotland in the pope's homily. He asked them also to live holy lives, but not just because it's what the Church says to do. "I urge you to lead lives worthy of our Lord (cf. Eph 4:1) and of yourselves. There are many temptations placed before you every day - drugs, money, sex, pornography, alcohol - which the world tells you will bring you happiness, yet these things are destructive and divisive." He told the youth of Scotland only the love of Christ is lasting and only Jesus offer freedom from all the things today's society says one should have and do. Things that ultimately leave one unfulfilled. He ended his homily with a few words in ancient Scottish Gaelic assuring the faithful of Scotland that he will continue to pray for them. For the whole text of the Pope's homily, click here. Photo: CNS