It was an appropriate beginning to evening prayer at Westminster Abbey. 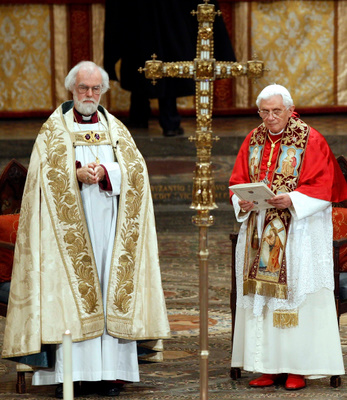 Our commitment to Christian unity is born of nothing less than our faith in Christ, in this Christ, risen from the dead and seated at the right hand of the Father, who will come again in glory to judge the living and the dead.  It is the reality of Christ’s person, his saving work and above all the historical fact of his resurrection, which is the content of the apostolic kerygma and those credal formulas which, beginning in the New Testament itself, have guaranteed the integrity of its transmission.

As has been custom in his speeches, he also pointed to an appropriate English saint as a model.  This time, it was a doctor of the Church -- Saint Bede the Venerable.

At the dawn of a new age in the life of society and of the Church, Bede understood both the importance of fidelity to the word of God as transmitted by the apostolic tradition, and the need for creative openness to new developments and to the demands of a sound implantation of the Gospel in contemporary language and culture. ... May Saint Bede’s example inspire the Christians of these lands to rediscover their shared legacy, to strengthen what they have in common, and to continue their efforts to grow in friendship.

You can read the full address here. This was the last event of the day for the Holy Father before he retired for the night at the Nunciature in Wimbledon. Join Salt + Light Television around 5am ET Saturday morning as we enter the third day of our live coverage.  We begin with Mass at Westminster Cathedral.  See broadcast details here. - Photo: CNS