Pope in UK: A Westminster Affair

The Pope's afternoon on day two of his UK visit is one not soon to be forgotten. The events, the public figures, the speeches and the ideas put forth have all paved the way for a new and positive direction for the role of faith in society. 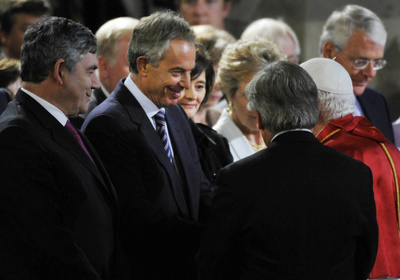 His visit to Westminster Hall drew a crowd of prominent figures in British society, academics and politicians  including many of the country's former Prime Ministers Tony Blair, Gordon Brown, John Major and Margaret Thatcher. The Speaker of the House, John Bercow delivered an eloquent and cordial welcoming speech to the Holy Father. He called attention to the fact that this event marked the first time a Pontiff had ever visited Westminster Hall in its over 1,000 year history. Westminster Hall, the oldest room of its kind in Europe, has been the setting for some of history's greatest trials and condemnations. Included in these is that of Speaker John Bercow's predecessor, Saint Thomas More. More was sentenced to death in the 16th century because he refused to accept King Henry VIII as the Head of the Church, saying he was "the king's good servant, but God's first." Bercow called the Pope's presence in Westminster Hall historically significant: "What was once thought inconceivable seems now natural." He spoke of a 'healthy tension' between Church and State in the UK, saying that it is healthy to have debate. He stressed that the difficult past and turbulent present should not be the barrier for an enlightened future. The Pope began his address to the senior members of British Society by expressing his esteem for the British Parliament; its history, influence and contributions to global society.  His words then acknowledged the setting of Westminster Hall and the legacy of Saint Thomas More.

As I speak to you in this historic setting, I think of the countless men and women down the centuries who have played their part in the momentous events that have taken place within these walls and have shaped the lives of many generations of Britons, and others besides. In particular, I recall the figure of Saint Thomas More, the great English scholar and statesman, who is admired by believers and non-believers alike for the integrity with which he followed his conscience, even at the cost of displeasing the sovereign whose “good servant” he was, because he chose to serve God first. The dilemma which faced More in those difficult times, the perennial question of the relationship between what is owed to Caesar and what is owed to God, allows me the opportunity to reflect with you briefly on the proper place of religious belief within the political process.

You can read the full address here. The Pope called for those present to seek ways to promote faith at every level of national life, saying that the voice of religion must be heard in the public square.  He stressed that religion and politics need to be in dialogue. He also recognized that his unprecedented invitation to speak before them today is indeed a step in that direction. The event was definitely a momentous occasion and one that will surely go down in history. Stay tuned tomorrow: Saturday, September 18th and Sunday, September 19th for Salt+Light's live coverage of the Papal Visit to the UK. - Photo: CNS