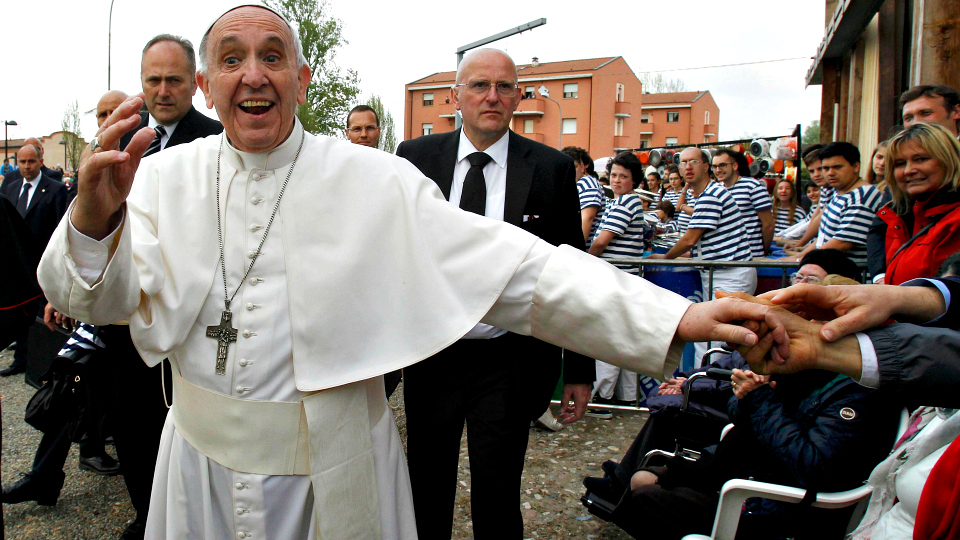 Pastoral Visit of the Holy Father to Carpi

Holy Mass in Piazza Martiri On Sunday April 2, 2017  the Holy Father departed by helicopter from the Vatican airport for his pastoral visit to Carpi. Upon arrival at the “Dorando Pietro” rugby field, the Pope was received by the Bishop of Carpi, His Excellency Msgr. Francesco Cavina, the President of the Emilia-Romagna region, Hon. Stefano Bonaccini, the prefect of Modena, Maria Patrizia Paba and the Mayor of Carpi, Alberto Bellelli, who gave the Holy Father a brick from the Fossoli Concentration Camp. The Holy Father then transferred by Popemobile to Piazza Martiri where, at 10:30, he presided at the Eucharistic celebration. At the end of Mass, the Bishop Francesco Cavina, addressed some words of thanks to the Pope. Following the Gospel, Pope Francis gave the following homily:

Angelus prayer and blessing of the first stones of the four new buildings of the Diocese of Carpi. At the end of Mass in Piazza Martiri in Carpi, before reciting the Marian Angelus prayer, the Holy Father Francis expressed his closeness to the inhabitants of the city of Mocoa in Colombia, devastated by a landslide that has claimed numerous victims. The Pope then made an appeal for peace in the Kasai region, in the Democratic Republic of the Congo and finally urged prayer for the difficult situations in Venezuela and in Paraguay. At the end of the Angelus, the four first stones for the parish of Sant’Agata in Carpi, the House of Spiritual Exercises in Novi, the Citadel of Charity of Carpi and the multipurpose facility of San Martino Corona in Mirandola were presented to the Pope for his blessing. The following are the Pope’s appeals and his introduction to the Marian prayer:

Appeals of the Holy Father I am deeply saddened by the tragedy that has struck Colombia, where a gigantic mudslide caused by torrential rains, hit the city of Mocoa, causing numerous deaths and injuries. I pray for the victims and assure you of my and your closeness to those who mourn the death of their loved ones, and I thank all those who are working to bring relief. There continue to be reports of bloody armed clashes in the region of Kasai in the Democratic Republic of Congo, clashes which are claiming victims and causing displacement, and which also affect people and property of the Church: churches, hospitals and schools. I assure you of my closeness to this nation, and I urge you all to pray for peace so that the hearts of those responsible for such crimes do not remain slaves to hatred and violence, as hatred and violence always destroy. In addition, I follow with great attention to what is happening in Venezuela and Paraguay. I pray for those populations, which are very dear to me, and I urge everyone to persevere tirelessly, avoiding any form of violence, in the search for political solutions. The Holy Father’s words before the Angelus prayer Dear brothers and sisters, I would like to thank you for coming here, to this Mass. I want to thank all those who worked for this double “marathon”: last Sunday [for the inauguration of the restored Cathedral] and this. Thank you very much! And I want to thank you, the sick. There are 4,500 sick people here! Thank you: with your sufferings you help the Church, you help to carry the cross of Christ. Thank you! Many thanks to you! And at the end of this celebration, our thoughts turn to the Blessed Virgin, whom you venerate in the cathedral church dedicated to her. To Mary we offer our joys, our sorrows and our hopes. We ask you to place her merciful gaze upon those among us who are suffer, especially the sick, the poor and those without dignified work. Recalling the apostolic zeal of two figures lay of your land, Blessed Odoardo Focherini and Venerable Marianna Saltini, witnesses of the charity of Christ, I greet you, the lay faithful, with gratitude. I encourage you to be agents in the life of your community, in communion with your priests: always focus on what is essential in proclaiming and witnessing the Gospel. I thank you, dear Bishop Francesco, and all of you, the bishops of the Emilia-Romagna region, for your presence, and above all the pastor of this diocese, Msgr. Francesco Cavina: I urge you to be close to your priests with listening, tenderness and thoughtful closeness. Finally, I would like to thank each and every one of you, dear faithful, priests, men and women religious, the authorities and especially those who helped to organize this visit, with a special thought for the AGESCI and the choir, composed of all the choirs of the diocese, who have animated this liturgy. Entrusting our lives and the fate of the Church and of the world to Mary, let us recite the Angelus prayer together.

Encounter with diocesan priests, men and women religious, and seminarians in the Seminary Chapel
Later that afternoon, in the Chapel of the Seminary of Carpi, the Holy Father Francis met with diocesan priests, men and women religious and seminarians. After greeting to Bishop Francesco Cavina, the Pope gave an off-the-cuff address. At the end of the encounter, the Holy Father left the Seminary and stopped briefly in the Cathedral. He then transferred by car to Mirandola.
Visit to the Duomo of Mirandola and encounter with the populations affected by the earthquake
Later that afternoon, the Holy Father Francis visited the Cathedral of Mirandola. Upon arrival he was received by the mayor of the city, Maino Benatti, and by Don Flavio Segalina, parish priest of the Duomo. The Pope stopped in the square in front of the entrance to the Duomo, still inaccessible due to the 2012 earthquake and addressed the following words to the populations affected by the earthquake:

The Holy Father’s address Dear brothers and sisters, In this city of yours, still bearing visible signs of such a difficult trial, I wish to embrace you and the inhabitants of other towns struck by the earthquake in May of 2012. My venerable Predecessor, Pope Benedict XVI, came to this area a few weeks after the event to bring solidarity and his personal encouragement, and that of the entire ecclesial community. Today I am among you to confirm to you the affection of all the Church and to show to each one of you my closeness and my encouragement for the path that still lies ahead in reconstruction. I address a cordial greeting to the bishop of this Diocese, Msgr. Francesco Cavina, the parish priest and the other priests, and the mayor and other authorities. I renew my appreciation of the Civil Defence, the volunteers and all who have been involved, at different levels, in the activities of restoring structures and in the resumption of community life. I am well aware of how much the earthquake has affected the human and cultural heritage of this land of yours. I think of the hardships you have suffered: damage to your homes, to your productive activities, to churches and other monuments, rich in history and art and a symbol of the spirituality and culture of an entire people. But I think especially of the inner wounds: the suffering of those who lost their loved ones and those who have seen the disappearance of a lifetime’s sacrifices. In the days following the earthquake, your example of dignity and resourcefulness inspired great admiration in all. You have endeavoured to face with evangelical spirit the precarious situation caused by the earthquake, recognizing and accepting in painful events the mysterious presence of a Father who is always loving even in the toughest trials. Wounds have healed, yes, they have healed. But the scars remain, and will remain for a lifetime. And looking at these scars, have the courage to grow and to raise your children in that dignity, in that fortitude, in that spirit of hope, in that courage you had at the time of the wounds. It is my hope that the strength of heart, the hope and the qualities of industriousness that set you apart will never be lacking. Remain steadfast in your intent not to give in to discouragement before the difficulties that still remain. Indeed, much it has been done in the work of reconstruction, but strong commitment to the recovery of historical centres too is more important than ever: they are places of historical memory and essential spaces for social and ecclesial life. I am sure you will not be lacking in good will, on the part of all those involved, to ensure a rapid execution of these necessary works, for the common good. In front of your Cathedral, a symbol of the faith and tradition of this area and seriously damaged by the earthquake, with you I raise to the Lord a fervent prayer for the victims of the earthquake, for their families and for those who continue to live in precarious situations. May the Lord make His support felt by each one of you! I wish to leave, on the altar of the Duomo, a bouquet of flowers in memory of those who left us in the earthquake. Dear brothers and sisters, in two weeks we will celebrate the Easter of Resurrection. May the strength of the Risen Lord sustain your commitment to complete reconstruction and inspire your hope. May the Virgin Mary and your patron saints obtain from the Lord the strength for those still in difficulty; may they obtain light and strength for minds and hearts so that all your expectations can soon be fulfilled. I thank you: thank you for the example you have given to all of humanity, an example of courage, of carrying on, of dignity. I warmly impart my Blessing to you and to the entire population gathered here. [Blessing] And please, I ask you to pray for me. Thank you.

Floral tribute to the Monument to earthquake victims At the end of the encounter in the square in front of the Duomo of Mirandola, with the populations affected by the earthquake, the Holy Father Francis transferred by car to the parish of San Giacomo in Roncole to lay a floral tribute to the Monument commemorating the victims of the earthquake, situated in the area adjacent to the parish. Then, after farewell greetings from the authorities who had received him in the morning, he departed by helicopter from the sports field next to the parish to return to Rome.