Pope Francis is TIME Person of the Year: Reaction 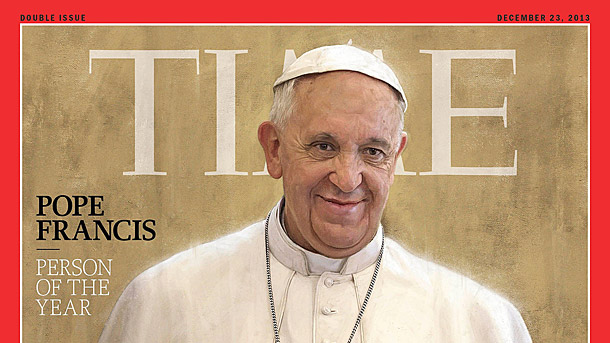 Declaration by Fr. Federico Lombardi S.J., regarding the nomination of Pope Francis as "Person of the Year" by Time Magazine
This fact is unsurprising, considering the resonance and very widespread attention given to the election of Pope Francis and the beginning of his pontificate. It is a positive sign that one of the most prestigious acknowledgements in the field of the international press has been attributed to one who proclaims spiritual, religious and moral values in the world, and who speaks effectively in favour of peace and greater justice. With regard to the Pope, for his part, he does not seek fame and success, since he carries out his service for the proclamation of the Gospel and the love of God for all. If this attracts men and women and gives them hope, the Pope is content. If this nomination as "Person of the Year" means that many have understood this message, at least implicitly, he will certainly be glad.
From Fr. Thomas Rosica, CSB
Corresponding Assistant for English Language Relations Holy See Press Office
I can only re-echo the sentiments of Fr. Lombardi.  The decision of TIME Magazine is no surprise.  What I have personally witnessed over the past nine months, and in particular working closely with English language media around the entire world, is that many of you have not only reported the stories, but have understood the great gift the world received on March 13, 2013.  The life, messages and gestures of Pope Francis have clearly transcended religious and sectarian divisions.  He is an instrument of peace and hope for humanity.  Clearly he spends himself gladly and joyfully for the the world.  The world would be a poorer place without Francis, Bishop of Rome.
---
(CNS Photo/Time Inc. handout via Reuters)