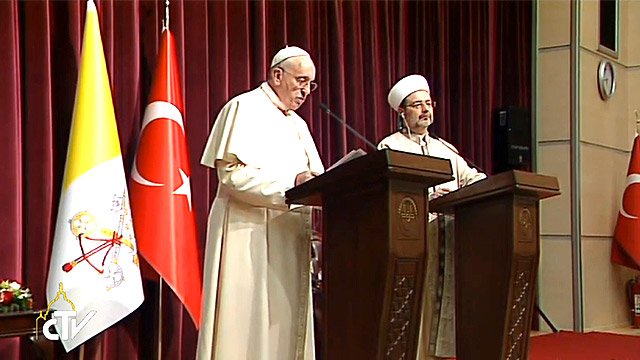 The full text of Pope Francis' address to Religious Leaders in Turkey can be found below:

Mr President, Religious and Civil Authorities, Ladies and Gentlemen, I am pleased to meet with you today in the course of my visit to your country.  I thank the President of this distinguished office for his cordial invitation which affords me the opportunity to share these moments with political and religious leaders, both Muslim and Christian. It is a tradition that Popes, when they visit different countries as part of their mission, meet also with the leaders and members of various religions.  Without this openness to encounter and dialogue, a Papal Visit would not fully correspond to its purposes. And so I have wished to meet you, following in the footsteps of my venerable predecessors.  In this context, I am pleased to recall in a special way Pope Benedict XVI‚s visit to this very same place in November 2006. Good relations and dialogue between religious leaders have, in fact, acquired great importance.  They represent a clear message addressed to their respective communities which demonstrates that mutual respect and friendship are possible, notwithstanding differences.  Such friendship, as well as being valuable in itself, becomes all the more meaningful and important in a time of crises such as our own, crises which in some parts of the world are disastrous for entire peoples. Wars cause the death of innocent victims and bring untold destruction, interethnic and interreligious tensions and conflicts, hunger and poverty afflicting hundreds of millions of people, and inflict damage on the natural environment ˆ air, water and land. Especially tragic is the situation in the Middle East, above all in Iraq and Syria.  Everyone suffers the consequences of these conflicts, and the humanitarian situation is unbearable.  I think of so many children, the sufferings of so many mothers, of the elderly, of those displaced and of all refugees, subject to every form of violence.  Particular concern arises from the fact that, owing mainly to an extremist and fundamentalist group, entire communities, especially ˆ though not exclusively ˆ Christians and Yazidis, have suffered and continue to suffer barbaric violence simply because of their ethnic and religious identity.  They have been forcibly evicted from their homes, having to leave behind everything to save their lives and preserve their faith.  This violence has also brought damage to sacred buildings, monuments, religious symbols and cultural patrimony, as if trying to erase every trace, every memory of the other. As religious leaders, we are obliged to denounce all violations against human dignity and human rights.  Human life, a gift of God the Creator, possesses a sacred character.  As such, any violence which seeks religious justification warrants the strongest condemnation because the Omnipotent is the God of life and peace.  The world expects those who claim to adore God to be men and women of peace who are capable of living as brothers and sisters, regardless of ethnic, religious, cultural or ideological differences. As well as denouncing such violations, we must also work together to find adequate solutions.  This requires the cooperation of all: governments, political and religious leaders, representatives of civil society, and all men and women of goodwill. In a unique way, religious leaders can offer a vital contribution by expressing the values of their respective traditions.  We, Muslims and Christians, are the bearers of spiritual treasures of inestimable worth.  Among these we recognize some shared elements, though lived according to the traditions of each, such as the adoration of the All-Merciful God, reference to the Patriarch Abraham, prayer, almsgiving, fasting? elements which, when lived sincerely, can transform life and provide a sure foundation for dignity and fraternity.  Recognizing and developing our common spiritual heritage ˆ through interreligious dialogue ˆ helps us to promote and to uphold moral values, peace and freedom in society (cf. JOHN PAUL II, Address to the Catholic Community in Ankara, 29 November 1979). The shared recognition of the sanctity of each human life is the basis of joint initiatives of solidarity, compassion, and effective help directed to those who suffer most.  In this regard, I wish to express my appreciation for everything that the Turkish people, Muslims and Christians alike, are doing to help the hundreds of thousands of people who are fleeing their countries due to conflicts.  This is a clear example of how we can work together to serve others, an example to be encouraged and maintained. I wish also to express my satisfaction at the good relations which exist between the Diyanet and the Pontifical Council for Interreligious Dialogue.  It is my earnest desire that these relations will continue and be strengthened for the good of all, so that every initiative which promotes authentic dialogue will offer a sign of hope to a world which so deeply needs peace, security and prosperity. Mr President, I renew my gratitude to you and your colleagues for this meeting, which fills my heart with joy.  I am grateful also to each one of you, for your presence and for your prayers which, in your kindness, you offer for me and my ministry.  For my part, I assure you of my prayers.  May the Lord grant us all his blessing.