Pope Francis in Lesbos: Address to the Population of Lesbos 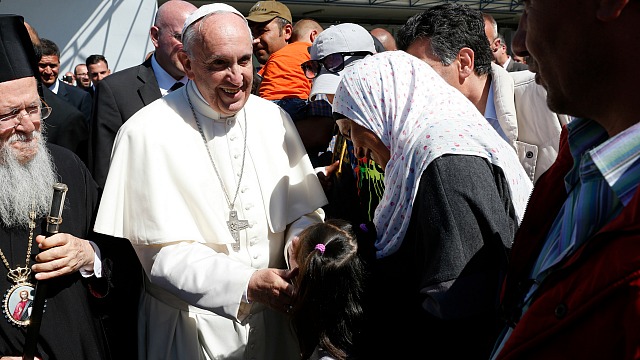 Distinguished Authorities, Dear Brothers and Sisters, I have wanted to visit Lesvos ever since migrants arrived here seeking peace and dignity. Today I give thanks to God who has granted me this wish. I express my appreciation to President Pavlopoulos for inviting me, together with Patriarch Bartholomew and Archbishop Ieronymos. I wish to express my admiration for the Greek people who, despite their own great difficulties, have kept open their hearts and their doors. Many ordinary men and women have made available the little they have and shared it with those who have lost everything. God will repay this generosity, and that of other surrounding nations who from the beginning have welcomed with great openness the large numbers of people forced to migrate. Your island is blessed by the generous presence of many volunteers and various associations that, together with public institutions, have offered and continue to offer their assistance, visibly expressing their fraternal concern. Today, I renew my heartfelt plea for responsibility and solidarity in the face of this tragic situation. Many migrants who have come to this island and other places in Greece are living in trying conditions, in an atmosphere of anxiety and fear, at times even of despair, due to material hardship and uncertainty for the future. The worries expressed by institutions and people, both in Greece and in other European countries, are understandable and legitimate. We must never forget, however, that migrants, rather than simply being a statistic, are first of all persons who have faces, names and individual stories. Europe is the homeland of human rights, and whoever sets foot on European soil ought to sense this, and thus become more aware of the duty to respect and defend those rights. Unfortunately, some, including many infants, could not even make it to these shores: they died at sea, victims of unsafe and inhumane means of transport, prey to unscrupulous thugs. You, the residents of Lesvos, show that in these lands, the cradle of civilization, the heart of humanity continues to beat; a humanity that before all else recognizes others as brothers and sisters, a humanity that wants to build bridges and recoils from the idea of putting up walls to make us feel safer. In reality, barriers create divisions instead of promoting the true progress of peoples, and divisions sooner or later lead to confrontations. To be truly united with those forced to flee their homelands, we need to eliminate the causes of this dramatic situation: it is not enough to limit ourselves to responding to emergencies as they arise. Instead, we need to encourage political efforts that are broader in scope and multilateral. It is necessary, above all, to build peace where war has brought destruction and death, and to stop this scourge from spreading. To do this, resolute efforts must be made to counter the arms trade and arms trafficking, and the often hidden machinations associated with them; those who carry out acts of hatred and violence must be denied all means of support. Cooperation among nations, international organizations and humanitarian agencies must be tirelessly promoted, and those on the frontlines must be assisted, not kept at a distance. In this regard, I reiterate my hope that the First World Humanitarian Summit being held in Istanbul next month will prove productive. All of this can be achieved only if we work together: solutions to the complex issue of refugees which are worthy of humanity can and must be sought. In this regard, the contribution of Churches and religious communities is indispensable. My presence here, along with that of Patriarch Bartholomew and Archbishop Ieronymos, is a sign of our willingness to continue to cooperate so that the challenges we face today will not lead to conflict, but rather to the growth of the civilization of love. Dear brothers and sisters, God is neither indifferent to, nor distant from, the tragedies that wound humanity. He is our Father, who helps us to work for good and to reject evil. Not only does he come to our aid, but in Jesus he has shown us the way of peace. Before the evil of this world, he made himself our servant, and by his service of love he saved the world. This is the true power that brings about peace. Only those who serve with love build peace. Service makes us go beyond ourselves and care for others. It does not stand by while people and things are destroyed, but rather it protects them; service overcomes that dense pall of indifference that clouds hearts and minds. Thank you, for you are guardians of humanity, for you care with tenderness for the body of Christ, who suffers in the least of his brothers and sisters, the hungry and the stranger, whom you have welcomed (cf. Mt 25:35). Evharistó!