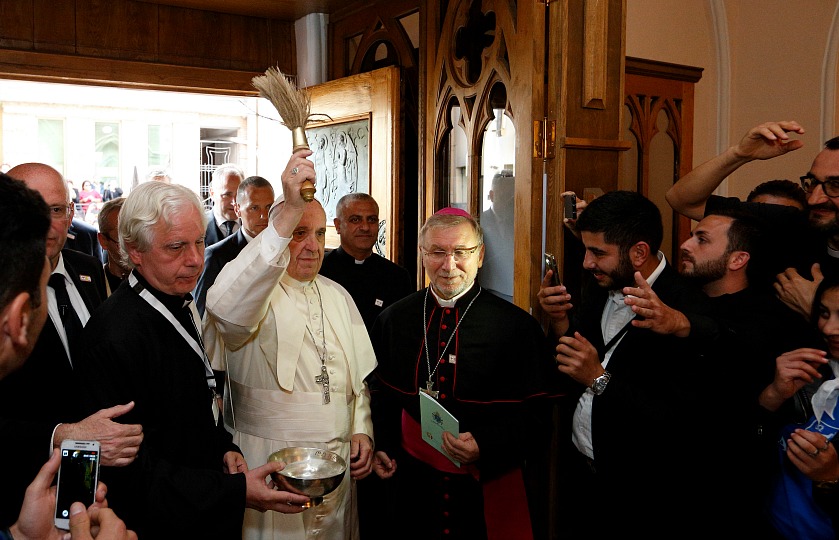 CNS photo/Paul Haring
Pope Francis’ first engagement on Saturday afternoon in the Georgian capital was a meeting with priests, religious and seminarians in Tbilisi’s Church of the Assumption. In an off-the-cuff address to the gathering, the Pope warned against what he termed “a global war to destroy marriage” in contemporary society, saying the great enemy of marriage nowadays was "gender theory." In his wide-ranging address to priests, religious and seminarians gathered in Tbilisi’s Church of the Assumption, Pope Francis spoke about being strong in our faith, the threats facing the institution of marriage and warned about the dangers of proselytizing with our “Orthodox brothers.” Picking up on the testimony offered by a group of Catholics, the Pope stressed the importance of being strong in our faith and passing it on to the next generation, noting that in many cases it is the grandparents who perform the valuable task of helping to transmit the faith to the young. Turning next to the issue of marriage and the threats against it mentioned by one of the speakers, Pope Francis said that nowadays there is “a global war to destroy marriage,” saying the great enemy of marriage today is “gender theory.” This war, he explained, is not “being waged with weapons but with ideas,” describing them as ideological colonizations. He warned his listeners against them and said if a couple is arguing and facing problems in their marriage, they must make peace before the end of day. Don’t forget, said the Pope, that there are three golden expressions that can help keep a marriage afloat. These are “May I, thank you and sorry.” The question of ecumenism and the problems it can pose, was another issue discussed by the Pope that had been mentioned earlier by one of the speakers. Pope Francis told his listeners never to argue with their Orthodox friends or neighbours and especially warned Catholics never to try “to convert them.” He described proselytism as “a big sin against ecumenism” and encouraged his audience to be on friendly terms with Orthodox believers, to perform works of charity together and never to condemn them or refuse to greet them on account of who they are. Pope Francis concluded his address by touching on the dangers of worldliness, reminding that Jesus had “spoken out strongly” against this ever present danger facing believers. May the Lord free us from worldliness, he said, and keep us strong in the faith that "we received from our mothers and grandmothers."